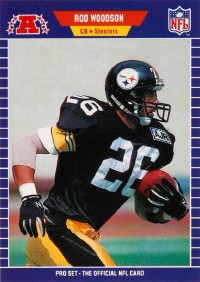 Rod Wilson was a  NFL MVP and was  the "Man of Steel." See more pictures of football stars.

Rod Woodson did it all during his college career at Purdue. He played running back and wide receiver on offense, played cornerback and safety on defense, and returned punts and kickoffs.

A consensus All-American, Woodson broke 13 Purdue records. In his final regular-season game in his senior year, he rushed for 93 yards, had three interceptions for 67 yards, returned two kickoffs for 46 yards and three punts for 30 yards, made 10 tackles, and forced a fumble.

Although Woodson (born 1965) envisioned himself as a "triple threat" player when the Pittsburgh Steelers made him their No. 1 pick in the 1987 draft, head coach Chuck Noll felt otherwise.

Noll reasoned that his young star was too valuable to risk by playing both offense and defense. He wanted him to concentrate on returning kicks and playing cornerback.

Noll's discipline paid off when Woodson earned Pro Bowl honors as both a kick return specialist and a cornerback.

But it wasn't until Noll's successor, Bill Cowher, took over that Woodson really blossomed. In 1992, he led the Steelers in tackles and collected six sacks -- a rare accomplishment for a cornerback.

The following season, the "Man of Steel" had 28 passes defensed, knocked down another two at the line of scrimmage, forced two fumbles, had two quarterback sacks, blocked a field goal attempt, and recorded a team-high 79 solo tackles. For his efforts, he was named NFL Defensive Player of the Year.

There were more honors in 1994. The most impressive was being named to the NFL's 75th Anniversary All-Time Team -- a distinction reserved for just five active players.

Unfortunately, misfortune struck in the opening game of the 1995 season when the three-time team MVP suffered a knee injury that required reconstructive surgery.

After leaving the Steelers at the end of the 1996 season, Woodson played for seven more years, shifting his position to safety for the San Francisco 49ers, Baltimore Ravens, and Oakland Raiders.

Woodson won a second Super Bowl with Baltimore and appeared in his third as a member of the Raiders. In fact, in the 2002 Super Bowl season for Oakland, Woodson led the NFL in interceptions with eight -- the first time in his career he'd accomplished the feat. His 11 Pro Bowls are a record for defensive backs.