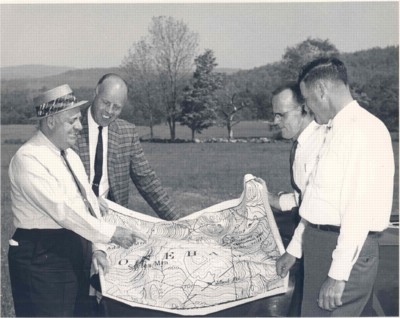 The most prolific and influential golf course architect of the second half of the 20th century, Robert Trent Jones is credited with designing more than 450 courses in 42 states and 23 countries in a career that has stretched over 60 years.

Jones was born in England in 1906 and moved to the United States with his parents in 1911. Jones knew early in life what he wanted to do. As a student at Cornell University, he designed his own curriculum of courses that would prepare him for a career in golf architecture. Jones then became a partner of Canadian architect Stanley Thompson.

Jones' career took off after World War II, when golf began to boom in America. He became known for his redesigns of U.S. Open courses, which he modernized to keep up with advances in golf equipment.

The first and most famous of these redesigns came at Oakland Hills in preparation for the 1951 U.S. Open. The course was dubbed "The Monster," and Jones' reputation was established.

Jones remodeled several other Open sites in the 1950s and 1960s, and he eventually had three Opens played on courses of his own design: Bellerive, Hazeltine National, and Atlanta Athletic Club.

Jones advocated the philosophy of strategic design, blending the heroic and penal principles of golf architecture. He became known for designing courses with long teeing grounds and large, undulating greens, and he brought water into play more than the architects of past eras.

Jones' more famous courses include Spyglass Hill in California, Firestone in Ohio, the Dunes in South Carolina, Peachtree in Georgia, and Mauna Kea in Hawaii. He has worked extensively in Europe, where his most acclaimed course is Valderrama in Spain.

Jones, working with chief assistant Roger Rulewich, continued turning out courses as he approached his 90th birthday. The Robert Trent Jones Golf Trail in Alabama, opened in the early 1990s, is one of the most ambitious and successful public-course projects in the country. Jones' sons, Robert Jr. and Rees, are respected architects in their own right.