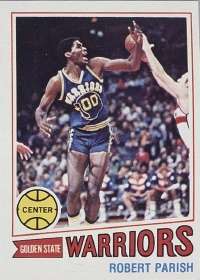 Quietly and proudly, Robert Parish lasted more than two decades in the NBA. He entered the league in 1976 and earned the name "the Chief," after the stoic hero of One Flew Over the Cuckoo's Nest. Parish never led the NBA in any statistical category or even averaged 20 points in a season, but he played more games than any player in history and won four championship rings.

Larry Bird, Parish's teammate with the Boston Celtics, said that Parish was the most unselfish player he had ever played with, and Boston sportswriter Bob Ryan called Parish "the single most underrated Celtic of all time." Aligned with Bird and Kevin McHale on the Celtics' "Big Three" front line in the 1980s, Parish was content to rebound, defend, run the floor, and take whatever offense he could get, usually in the form of his high-arching turnaround jump shot.

Parish told Hoop that his greatest individual accomplishment was a 30-point, 32-rebound game against the New York Knicks in 1979, but that his favorite memory was the first NBA championship he won, in 1981.

Born August 30, 1953, in Shreveport, Louisiana, Parish attended Centenary College in his home state, then joined the Golden State Warriors for four seasons, during which his easygoing gait and poker face were mistaken for laziness and indifference. Although he averaged 17.0 points and 10.9 rebounds in the 1979-1980 season, the Warriors traded him to Boston in June 1980 on the same day Boston acquired McHale.

Parish proved a godsend when Dave Cowens retired unexpectedly during training camp that fall. With Parish and McHale playing key roles, the Celtics downed the Houston Rockets in the 1981 NBA Finals. The Celtics won again in 1984 and again in 1986 with one of the best starting lineups in history: Parish, Bird, and McHale up front; Dennis Johnson and Danny Ainge in the backcourt; and Bill Walton as the sixth man.

Parish left the Celtics in 1994 to sign a free-agent contract with the Charlotte Hornets, and in 1996 he passed Kareem Abdul-Jabbar on the all-time list in games played. After two seasons in Charlotte, Parish played his final season with the Chicago Bulls -- the team that was torn over drafting him way back in 1976. He played sparingly, but earned a fourth title ring and ended his amazing games-played total at 1,611.