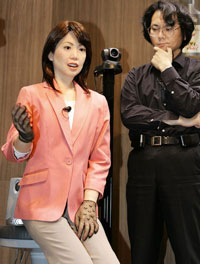 Engineers have been working on androids for decades, but you can't visit your local department store to buy an android butler for your home. Yet.

For many years, Honda has been working on a sophisticated android, the Advanced Step in Innovative Mobility, or ASIMO. It can walk by itself and even climb stairs. As advanced as it is, though, ASIMO's artificial intelligence is somewhat limited. It can recognize faces and voices and is capable of doing helpful tasks around the home, such as turning on the lights and carrying items.

Repliee Q1Expo is an android developed by professor Hiroshi Ishiguro of Osaka University. Like the replicants in "Blade Runner," Repliee Q1Expo closely resembles a human. It has soft silicone skin, eyelashes that move and a set of 42 actuators in its upper body that give it a range of motion [source: BBC] It even has motors that make it appear to "breathe."

Ishiguro didn't stop there. In 2007, he introduced the world to … himself. Actually, it was his doppelganger, an android named Geminoid that looks just like him. Ishiguro can see through its eyes and talk through its internal speaker. Like Repliee Q1Expo, its chest rises and falls in breathing motions.

Don't be too surprised if you find Geminoid a little creepy. Dr. Masahiro Mori theorizes that we're initially drawn to robots that seem more human-like, but once they get too human, we start to become repulsed. He wrote about this "Uncanny Valley" theory for the magazine Energy in 1970 [source: Android Science].

You might be surprised at how well a replicant can fool people into believing it's really a human. On the next page­, we confront the question that has bothered "Blade Runner" fans for years: Is Deckard a replicant, or is he human? You may be surprised to know the answer.

The difference in robots and androids is slight. A robot is an android if it's humanoid -- that is, if it has human form. So an android is a robot, but a robot is not necessarily an android. Humans with electronic limbs or other components, such as Luke Skywalker, Jaime Sommers, or Seven of Nine are cyborgs.