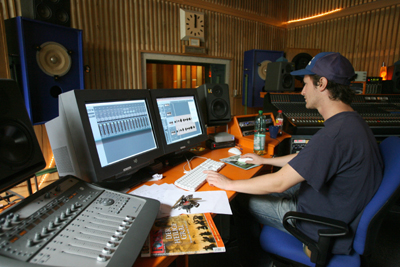 The next step is to assemble the tracks in the desired order. Track order influences the overall flow of the CD, like the emotional highs and lows of a good mix tape. Mastering engineers worry about track order first, because it will affect how each song is sonically balanced with those that come before and after it.

The most common tools of the mastering engineer are a compressor, a limiter and an equalizer. Both compressors and limiters are used to control the loudness of the song. This is not the same as the volume of the song, which is ultimately controlled by the listener. To understand how compressors and limiters work, you first need to understand the difference between loudness and dynamics.

Dynamics refer to the overall dynamic range of a song, which is measured by calculating the difference between the loudest and quietest parts of a song. In the recording studio, loudness is measured in negative decibels (-dB) with zero representing the loudest recordable sound. Without compression, a song might have a loud section that registers at -6dB and a soft part that measures -48dB for a total dynamic range of 42dB.

A limiter works in a similar way, putting a cap on the loudest parts of a song. If a sound exceeds that limit, it will be automatically reduced by a predetermined ratio, say 2:1. So for every two decibels over the limit, the sound will be reduced by one decibel. A good mastering engineer knows how to use compressors and limiters to add sufficient loudness and emotional impact to a track without over-flattening or collapsing the dynamic range.

Next, the engineer uses the equalizer tool to achieve the perfect tonal balance of the song. A software equalizer looks just like the analog equalizer on your home stereo with faders for each frequency of the audible spectrum. Throughout the song, the mastering engineer will adjust the faders to fatten bass sounds, highlight treble details and keep everything balanced.

Despite the transformative power of digital editing, some people are not fans of remastering CDs. Read on to find out why.