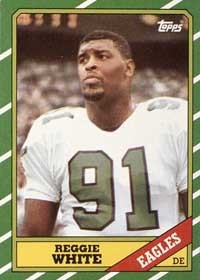 Reggie White was an ordained Baptist minister, participated in several off-the-field humanitarian services for his community and church. However, on the field, that's another matter. No quarterback in the NFL would ever describe White's actions as "humanitarian."

Nicknamed the "Minister of Defense," White (born 1961) was the NFL's preeminent sack artist. He was the only NFL player to register double-digit sack totals in nine consecutive seasons (1985-93).

After an outstanding career at the University of Tennessee, White began his pro football career in 1984 with the Memphis Showboats of the United States Football League.

Selected by the NFL's Eagles as their first-round choice in the supplemental draft of USFL players, he joined Philadelphia in the fourth week of the 1985 season.

White's NFL debut versus the New York Giants was nothing short of remarkable. The 6'5'', 300-pound terror recorded 2 1/2 sacks and deflected a pass that was intercepted by a teammate and returned for a touchdown.

In the strike-shortened 1987 season, White registered 21 sacks, just one short of the NFL record, despite appearing in just 12 games.

When it came to durability, White wrote the book. In his first 12 NFL seasons, he missed just one game, which came after he tore a hamstring in a December 10, 1995 game against the Tampa Bay Buccaneers.

Thought to be lost for the season, White surprised everyone, including his doctors, when he suited up the following week for a pivotal game against the New Orleans Saints.

Not only did White finish the regular season, but he played throughout the Packers' playoff run that fell one game short of a Super Bowl appearance.

"It's just another situation where something miraculous happened to me again," White said, "and I thank God for it."

One year later, White led the Pack to victory in Super Bowl XXXI. For his efforts in 1998, White was named the NFL's Defensive Player of the Year for the fifth time.

Some six years later, the retired White died in his sleep, suffering cardiac arrhythmia at age 43. The five-year Hall of Fame waiting period was waived, and White was posthumously inducted into the Hall of Fame in 2006.