Browse the article How Being a Reality Show Contestant Really Works 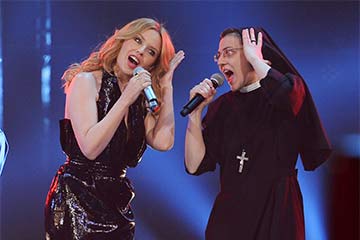 Sister Cristina, a Roman Catholic nun, sings a duet with Kylie Minogue on the Italian version of 'The Voice.' Sister Cristina won the singing contest in 2014 but did not quit her day job.
Stefania D'Alessandro/WireImage/Getty Images

"If I ever pass you along in life again, and you were laying there, dying of thirst, I would not give you a drink of water. I would let the vultures take you and do whatever they want with ya with no ill regrets," "Survivor: Borneo" contestant Susan Hawk spat out to fellow contestant Kelly Wiglesworth in the famous "rat and snake" speech; Hawk felt Wiglewsworth betrayed her during the game. Hawk's passionate diatribe cemented "Survivor" as the hit of the 2000-2001 television viewing season — 125 million people watched at least part of the finale — and ushered reality shows into the 21st century [source: Rawden].

Today, reality shows are all the rage. The popular television genre includes shows based on game play ("The Amazing Race"), talent ("American Idol," "America's Next Top Model"), relationships ("The Bachelor"), and celebrities ("Dancing With the Stars," "Keeping Up With The Kardashians"), to name but a few.

Although many believe reality shows began in America with the first "Survivor," their roots actually stretch back to 1948. That year, Allen Funt unveiled the TV series "Candid Camera,"which secretly filmed ordinary people's reactions when they stumbled into awkward or funny situations. The show was a quick hit [source: Slocum]. The 1970s featured game shows like "The Dating Game" and "The Newlywed Game." Then, in 1992, MTV debuted "The Real World," which threw together seven young adults in an urban home to see how they'd react. This reality genre pioneer paved the way for the debut of contestant-reality shows like "Survivor" and "Big Brother" in 2000 [source: Slocum].

That year, reality programming broke into Nielsen's top 10 prime-time broadcast TV shows for the first time and began a decade-long love affair with the genre — reality shows captured 56 percent of the audience watching top 10 shows in 2010-11 [source: Nielsen]. (In 2014, however, scripted shows are retaking the top 10, though some reality shows are still featured.)

With so many reality show fans, it's not surprising that thousands upon thousands of viewers are clamoring to get on a show. Some shows are inherently prohibitive, though. If you're not a celebrity, you can't get on "Dancing With the Stars;" if you're not obese, you won't be selected for "The Biggest Loser." Other shows employ casting agents to directly recruit at least some of their contestants — especially if they're looking for a particular character type — which lessens the chances for the average person to be selected. Still, plenty of regular people do get on.

Before you dash off to complete an application, though, read our tips for improving the odds of being selected.

How Do I Get on A Reality Show?

It's really difficult to land a spot on a reality show. But even though your chances aren't that great, they're probably better than winning the lottery. So give it a shot. You've got two main options: Sending in an application and video or attending a live audition, aka an open casting call.

The application/video process is the most common way people nab spots on a reality show. Here's how to make a favorable impression:

If your targeted show holds live auditions, they'll likely be held in a handful of larger cities over a period of weeks or months. Open casting calls typically attract a lot of people, so if you go, be prepared to wait a long time. Here's how to make the most of your audition:

Congrats! You've been selected to be on a reality show. Now, what?

When it comes to reality shows, no topic is too common, extreme or obscure to use as subject matter. In 2015, stations were recruiting for new shows based on people with spending or shopping addictions, divorcing couples, young adults trying to move out of their parents' homes, the Nashville music industry and people trying to find Bigfoot [source: ABC Reality TV]. 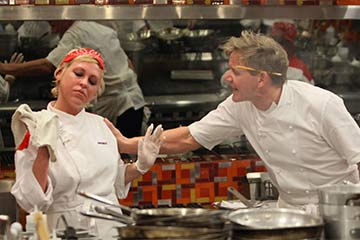 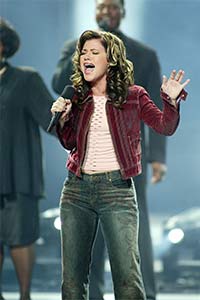