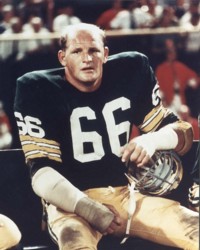 Ray Nitschke was a hard-hitting  linebacker who was also quick  enough to intercept 25 passes in his career. See more pictures of famous football players.

Ray Nitschke, according to Hall of Fame quarterback and teammate Bart Starr, was "a classic example of Dr. Jekyll and Mr. Hyde."

A fierce competitor, Ray was the heart of the great Green Bay Packers defense of the 1960s.

Born in 1936, Ray had to overcome a great deal of personal adversity at an early age. His father was killed when he was three and his mother died when he was 13.

He was adopted and raised by an older brother. It was his brother who convinced him to turn down a $3,000 baseball contract from the St. Louis Browns in favor of attending the University of Illinois. "It was the smartest thing I ever did," Ray said.

At Illinois, Nitschke played fullback on offense and linebacker on defense. The Packers drafted him in 1958 as a linebacker. Although he started eight games as a rookie, it wasn't until his third season that Nitschke got the job of middle linebacker for good.

Under fiery head coach Vince Lombardi, he quickly developed into a player who epitomized the hard-nosed style of those great Packers teams that played in six championship games and won the first two Super Bowls.

"The guy never let up," Nitschke recalled of Lombardi. "But he was consistent. ... He wanted me to not only be a good player but to be a good guy. I needed that."

Nitschke was a complete player. In addition to being a hard-hitting tackler, he was excellent in pass coverage as his 25 lifetime interceptions attest. In the 1962 title game, Ray recovered two fumbles and deflected a pass as the Packers defeated the New York Giants 16-7 in minus-20-degree windchill conditions.

For his efforts, he was named the game's MVP. In 1978, Nitschke became the first Green Bay defender from the 1960s to be elected to the Hall of Fame.