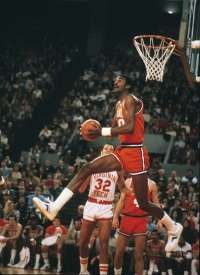 University of Virginia Athletics Ralph Sampson was one of the most heavily recruited basketball players during the 1980’s. See more pictures of basketball.

In literal and figurative terms, Ralph Sampson was college basketball's biggest star of the 1980's. A 7'4" center at the University of Virginia, Sampson won national Player of the Year honors three straight years and set school records for rebounds, blocked shots, and shooting accuracy.

Red Auerbach said he had the quickness, smarts, and reactions to be the next Bill Russell. But for many reasons, including three knee surgeries, Sampson enjoyed only brief success in the NBA.

Sampson had the smooth, easy actions of a man much shorter. He handled the ball adroitly, even dribbling it upcourt on occasion, and could run and jump like a small forward. He had steady aim on his jump shot and, on defense, acted as the world's tallest goalie. But Sampson, a proud, sensitive man, never was comfortable with being labeled a "franchise player."

Critics complained that he never developed a strong low-post game consistent with his physical skills. One of his harshest judges was Wilt Chamberlain, who called him "my number-one pick for biggest waste of ability."

Born July 7, 1960, in Harrisonburg, Virginia, Sampson led his high school team to two state championships. He enrolled at Virginia in 1979 and immediately became the most celebrated player in college basketball since Lew Alcindor. Despite being surrounded by zone defenses, Sampson averaged 16.9 points and 11.4 rebounds in four seasons. Virginia went 112-23 during that span but never won an NCAA title.

Meanwhile, NBA teams plotted to get him. The Houston Rockets threw away the entire 1982-1983 season (going 14-68) to improve their position in the 1983 draft (inspiring the NBA to begin a draft lottery system two years later). With Sampson in tow, the Rockets won 29 games and Sampson won the Rookie of the Year Award.

He moved to forward the following season, joining rookie Akeem Olajuwon in a Twin Towers alignment. Sampson averaged 20 points and 10 rebounds during his first four seasons, then was dealt to Golden State in 1987. The Warriors expected him to be their savior, but Sampson suffered a knee injury and deteriorated rapidly.

Waived out of the NBA in 1992, he finished his career overseas. In 2006, Sampson was indicted on perjury charges over child support. That September, he pleaded guilty to mail fraud and received a two-month prison sentence.