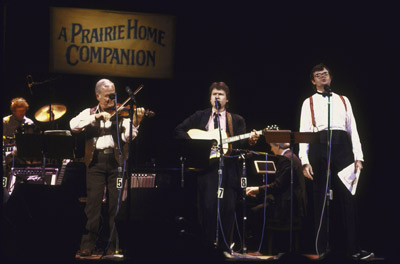 While radio lost many shows to television in the 1950s, and a number of shows disappeared from the airwaves altogether, radio did not, in fact, die. Instead, it underwent a kind of metamorphosis. The 1950s' American adolescent's fascination with cars as well as the rise of suburbs and the invention of the portable radio each helped keep radio a viable medium for information and entertainment. DJs and music shows became popular with teens cruising in their automobiles. Folks making the commute from the suburbs t­o the city relied on their radios for company. Portable radio made it easy to tune in at the beach or on the street.

A number of other radio shows have aired in the decades following the golden age of radio. Some have survived, while others haven't:

Other groups have embraced the art of radio theater, forming their own modern versions of the old-time radio shows. They provide programming live in theaters, through podcasts, as well as through XM and satellite radio broadcasting and recordings:

Arguably one of the most popular radio shows still in existence is Minnesota Public Radio's "A Prairie Home Companion." Harkening back to the format, tone and style of the early radio variety and comedy shows, "A Prairie Home Companion" lets audiences of today hear what it must have been like listening to radio show programming back in the golden age of radio. The show's host, Garrison Keillor, was very deliberate with this, basing his show on early radio variety programs right down to the format, use of sound effects, live music and comedic sketches. Unlike the original radio variety shows, Keillor doesn't have a cadre of mandatory sponsors and instead makes up a number of fictitious sponsors to amusing effect. The show originally aired back in 1974 and ran for 13 years. After taking a hiatus for five or so years, Keillor resurrected the show in 1993. If you want to join the millions of fans of this old-time radio styled show, check for your local listings. Grab a snack, put your feet up, close your eyes, sit back and just listen.

To learn more about radio and other forms of entertainment, tune in to the next page.