Style & Location of "Quantum of Solace" 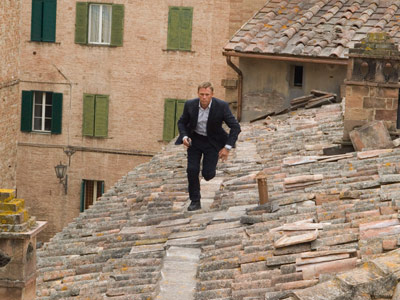 Shooting on location in Chile (playing Bolivia and Haiti), Panama, Mexico, Italy and Austria in addition to soundstages at Pinewood outside London give the movie its international flavor but multiplied the logistical challenges. Moving a company of 300 plus equipment around involved a lot of juggling, especially in locations like the small apartment in Colon, Panama, where Bond fights and kills an enemy. In buildings such as that and the hotel where movable ceilings and walls weren't possible, "I had to have practical lighting that would work," says Schaefer.

­For the scene set in Bregenz, Austria, at a production of the opera "Tosca," Schaefer worked with the play's lighting designer to change and augment existing settings on the dimmer board, adding and rebalancing lights so they would work on film. But in the opera house interior, "We had to change all of the fluorescent lights."

While second unit director Dan Bradley shot the aerial dogfight between a 1939 DC3 piloted by 007, an armed Marchetti and a Huey helicopter over 17 days in Baja, Mexico (augmented by cockpit interiors lensed on a blue screen stage at Pinewood), the parachute jump at the end of the sequence was done at a wind tunnel facility outside London called Bodyflight. Footage of Craig and Kurylenko in simulated freefall, captured by an array of 16 cameras, was combined with separately shot plates of the sky.

Many other sequences were hybrids as well. Scenes of the famous Palio horse race in Siena, Italy, were shot on location the previous summer and blended with a foot chase that takes Bond through sewers and over rooftops. Much of it was done at Pinewood, where Craig practiced jumping from building to building so that he could repeat it on location in Italy. "They had to reinforce some of the rooftops and hang balconies on existing buildings," notes Schaefer. Craig was tethered to safety wires, which were removed later by Visual Effects.

Forster's desire to include all four elements -- earth, sky, fire, and water -- made for exciting visuals but multiplied the difficulty factor. The climactic battle set in the Bolivian desert was also shot partly at Pinewood (interiors and explosions) and partly at the Chilean observatory ESO Paranal, and the boat chase was done in Colon, Panama, over 10 days. "The weather changes constantly in the Caribbean so it was impossible to get anything to match," notes Schaefer. It was one of many instances where VFX had to do sky replacement on shots.

­Visual effects supervisor Kevin Tod Haug and his team -- roughly 15 in-house plus five British vendors---had worked with Forster before but never with the kind of scale or volume as on "Quantum," as he details in the following section.