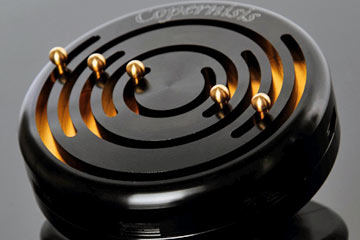 The Copernisis puzzle provides the third key required to help solve Isis V, which will be released in 2015.
Image courtesy of Sonic Games

In addition to buying and solving each of the five puzzle objects, players need to then enter the code inside the puzzle on the Sonic Games Web site to continue the challenge and become eligible for prizes. What happens next is pretty mysterious until you open the puzzle and register, but continuing the game involves treasure hunts, hidden pyramids and keys -- both real and virtual -- and location-specific searches for cash and gold and silver coins valued at up to $750 or more in 2011. Of the 16,000 or so players from 18 different countries, there have been just 137 winners and 17 treasure hunts. Sonic Games promises that the players who are actually able to unlock the different Isis puzzles will find "an unbelievable and fascinating global pyramid treasure hunt that will take them to places they've never dreamed of going" [source: Sonic Games].

If you like to look at the last few pages of a book early into reading it or to cheat just a little when stumped on a riddle, you can do the same with the world's hardest puzzle. While the hints and tips won't come from the makers of the game, online videos, forums and helps pop up everywhere and with surprisingly respectful warnings that there are spoilers or giveaways that could help someone solve the puzzle and end the challenge.

When Rubik's Cubes were all the rage, it wasn't hard to find someone who had it figured out and could get the colored sides all lined up in seconds. Many of the solvers had numbered guides showing players how to turn the levels of the cube to fix an out-of-position colored square. Some players chose to take just a couple of clues and others memorized all the variations and enjoyed the game for the speed they had in "solving" it with the answers provided.

Anyone who plays the Isis Adventure can get hints and answers, though each puzzle is said to be entirely unique, with its own set of codes. But even if an owner of one of the puzzles gets the needed help and solves the puzzle, it is a different experience than the Rubik's Cube because once an Isis puzzle is opened, it can't be put back together and solved again and again. Some players lament the fact that they can't rebuild the puzzles and display them after solving because they are such well-crafted pieces.

People have been playing the Isis Adventure since 2006, and with the last piece expected in 2015 it will have had at least a good decade of avid playing around the globe. It is unique among puzzles for its mystery and its levels of play, both as an object and a quest, but is it truly the most difficult puzzle in the world? If you try it, let us know what you think, but no spoilers please. An Em Go! (Spoiler: That's an anagram for "Game on!")

For more puzzling information, see the next page.