Browse the article How Tangrams Work 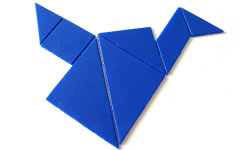 Tangrams are puzzles made of cut-out shapes that can be combined to form other shapes or designs.
Hemera/Thinkstock

Whether it's rock 'n' roll in the '50s, or violent video games in the 2000s, people have always found some new fad to use as a scapegoat for the supposed laziness and corruption of their generation. It might seem quaint to think that tangrams, simple Chinese puzzles involving rearranging small geometric tiles, could ever have filled that role in society. But tangrams were such a huge craze in Europe in the early 19th century that a French newspaper cartoonist once lampooned the fad with a drawing of a young "bourgeois" couple ignoring their screaming baby while they worked out a tangram problem [source: Slocum]. Today, tangrams can be an educational tool for the classroom, or just a fun brain teaser for the geometrically inclined. While tangrams' days of corrupting the youth may be over, they have endured as a favorite puzzle for people of all ages.

Tangrams are part of a type of puzzle that mathematicians and puzzle experts call dissection puzzles, puzzles made of cut out shapes that can be combined to form other shapes or designs. The most famous type of dissection puzzle is a jigsaw puzzle. But tangrams are different -- instead of one design cut up into many pieces with one solution, tangrams have just a few pieces that can be rearranged into a huge number of designs. A tangram set is composed of seven shapes cut out of a square. These tiles, or tans, include:

Tangram puzzles come in the form of silhouettes or outlines that are constructed by combining all seven tans. The object of the game is to re-create these shapes by figuring out the orientation of each tan. In books of puzzles, the solutions (or completed tangrams) show the outlines of the individual tans, but the puzzles don't. The challenge is for you to re-create the patterns by arranging the tans, following three simple rules: Each completed tangram must contain all seven tans; the tans cannot overlap each other; and the tans have to form a continuous shape, with every tan touching at least one other tan (touching only by the very tip of one corner is allowed).

These rules allow for a puzzle game that is deceptively simple and infinitely complex. Continue to the next page to find out when tangrams were invented.

Tangrams' true origins are obscure. Historians don't really know exactly when they were invented. The earliest record of the puzzle dates to around 1796, to a book that is mentioned in the historical record, but has never been found [source: Danesi]. Extant tangram sets have been dated as far back as 1802, and a Chinese book of tangram problems from 1813 has also been discovered [source: Slocum].

Whenever the modern form of the tangram was invented, the puzzle has its roots in Chinese mathematical tradition going back centuries. As long ago as the 3rd century B.C., Chinese mathematicians would study geometric principles by manipulating cut outs of various shapes. In fact, the Chinese used this method to deduce what Europeans call the Pythagorean theorem, the relationship between the sides and the hypotenuse of a right triangle. Historians have surmised that tangrams were likely developed from this type of problem solving [source: Slocum].

Whatever the truth about tangrams, the myths and legends about their history are far more interesting. Most of these -- for example, the story that a mythical god named Tan invented the shapes, and used them to communicate a creation story in a set of parchments written in gold -- can be traced back to a writer and puzzle inventor named Sam Loyd. Loyd's 1903 book, "The 8th Book of Tan," weaved this and other tall tales about the history of tangrams. Loyd made those stories up, and probably expected his readers to be in on the joke [source: Slocum and Hotermans]. But to this day, some of Loyd's "history" shows up in otherwise factual sources.

Loyd's book rode a global wave of popularity for the tangram at the time. Almost as soon as tangrams spread from China to Europe and the United States, around 1818, they became a sensation. Books of puzzles and tile sets made of polished wood or ornately carved ivory became extremely popular in Germany, France, England, Italy and the United States.

Just like the origin of the puzzle itself, the origin of the name "tangram" is hard to pin down. At first, it was simply called "The Chinese Puzzle." The name tangram came later. Some of the theories include that it derived from the English word "trangam" (which means "trinket"). According to others, the word is a portmanteau of "Tang," a historical Chinese dynasty, and "gram," which means a figure or drawing [source: Grunfeld].

Also-Rans in the History of Dissection Puzzles

Not every mathematical dissection puzzle has caught on as much as tangrams. The Sei Shonagon Chie-no-ita puzzle, introduced in 1700s Japan, is a dissection puzzle so similar to the tangram that some historians think it may have influenced its Chinese cousin. The loculus of Archimedes, another square dissection, dates back to the 3rd century, B.C. [source: Slocum and Hotermans]. 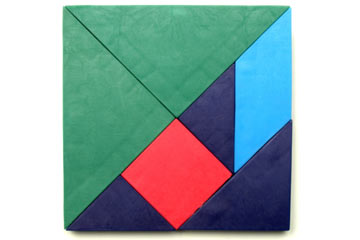 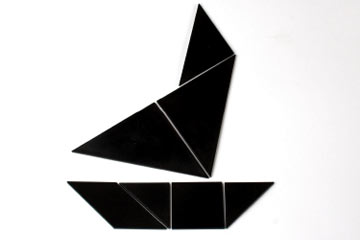