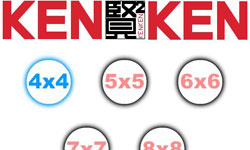 If you prefer to play your games online, KenKen puzzles can be found at KenKen.com, through Facebook and on The New York Times' Web site.

KenKen puzzles -- strategic, arithmetic-based mental exercises -- were created by Japanese math teacher Tetsuya Miyamoto in 2004. Miyamoto grew up a less-than-stellar student and felt that traditional teaching methods, laden with exams, weren't the best way to learn. Solving puzzles like KenKen, however, trained the brains of kids and adults alike to be great problem-solvers, which served them well in school, work and life. This philosophy helped shape Miyamoto's creation of the game, as well as its name -- ken is the Japanese word for wisdom, so the name KenKen roughly translates to wisdom squared [source: KenKen].

KenKen puzzles consist of a grid that can be anywhere from 3-by-3 to 9-by-9 cubes. Each puzzle is further divided into cages, or groups of cubes. A cage can be as small as one cube, or a more complex series of several cubes spanning different rows and columns. Each cage contains a target number and mathematical operation (addition, subtraction, division or multiplication). To solve the puzzle, you must place the proper number in each cube, guided by the target numbers and their specified math operations.

In 2006, shortly after Miyamoto invented his puzzle, Japanese educational publisher Gakken began marketing them as a series of children's books. In no time, 1.5 million were sold. By the end of 2008, the puzzles were an international sensation, as U.S.-based company Nextoy began marketing them internationally, and The Times (UK) newspaper began printing a KenKen puzzle each day [source: KenKen].

With demand so high, Miyamoto couldn't possibly create all of the puzzles himself, so the Kenerator was born. The computer program, developed in part by Miyamoto, now creates all the puzzles, then checks to make sure they're correct, that no row or column repeats a number and that each puzzle only has one solution [source: KenKen].

Today, you can find KenKen puzzles in many newspapers and magazines, online and even as a mobile smartphone app.

KenKen puzzles are grids of various sizes in which you have to place certain numbers in certain positions. The rules guiding which numbers you can place where are relatively simple and are similar to those in sudoku [sources: KenKen, McCarthy,].

The numbers from which you can choose are dictated by grid size. With a 3-by-3 puzzle, use numbers one through three; a 4-by-4 puzzle uses one through four and so on, up to 9-by-9 puzzles. Numbers cannot be repeated in any row or column [source: KenKen].

Within each grid, there are darker lines denoting variously-sized cages. A cage can be just one square, or cube, or several cubes that cross rows and columns, forming Ls, Ts and other shapes. Each cage contains a number and math operation. The numbers you place in each cage must combine to form the number using the math operation specified. So let's say there's a two-cube cage with "3+" in it. That means the numbers you put in the two cubes have to total three when added. Your choices, then, are one and two (1+2=3). Easy, except you also have to figure out which number goes in which square -- and that's impacted by the cubes and cages around it [source: McCarthy].

If a cage contains only one box, enter in the puzzle number indicated in the top corner. You can use a number more than once within a cage, provided it's not repeated in the same row or column [source: KenKen].

Miyamoto believes conventional teaching methods fail to truly educate people and stimulate their brains. So he offers a year-long weekend course where students work on improving their math and thinking skills, in part by solving his puzzles. Enrollment in his course is on a first-come, first-served basis, and the class fills immediately [sources: Lewis, Shortz]. 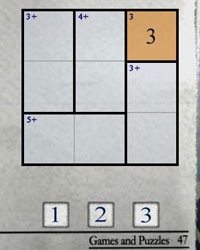 KenKen puzzles are 3-by-3 to 9-by-9. The smaller the puzzle, the easier to solve.

Even though only basic math is involved, KenKen is a game of logic and strategy. While guesswork can be used to help solve the puzzles -- and may be necessary in games featuring large grids -- it's best to study the tactics developed by the experts and hone your logic skills. Online tutorials and video clips are available, and depending on your learning style, they may be more helpful than reading a set of tips. Nevertheless, here are some of the top strategies espoused by the experts: