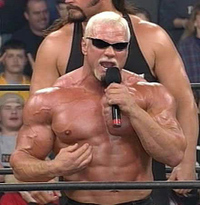 Professional wrestling grew out of the traveling carnival strongman, who would challenge anyone to beat him in the ring, or even to last 10 minutes. Challengers almost never won the prize money, since the strongman had helpers who would cheat to ensure his victory. Eventually, carnies realized they could make more money off the crowd than the entry fees of the fighters. They started accepting wagers on the fights, which were always fixed. Sometimes, the local fighter was even in on the fix, helping to hype the fight. These wrestlers used fake names and played up the animosity of the crowd to encourage betting.

In the late 1800s, promoters put wrestling events in arenas, much like boxing. For a few decades, many different individual promoters held wrestling events. Although there were championship belts in existence, none of them had any real authority. In 1901, promoters got together to form a loose organization called the National Wrestling Association, which awarded a single championship belt.

After World War II, the NWA divided wrestling into regional leagues. These federations were still a part of the NWA -- they had a gentleman's agreement not to steal each other's talent or expand their arena shows into another league's region. However, the Northeast federation, known as the World Wide Wrestling Federation (WWWF) was a bit of a maverick. Vince McMahon, Sr. started the WWWF in the early 1960s, and his son, Vince McMahon, Jr., took ownership in the 70s. McMahon, Jr. shortened the name to World Wrestling Federation (WWF) and almost immediately broke the gentleman's agreement. He went into direct competition with the regional leagues, stealing their talent, scheduling arena shows on their turf and scoring lucrative cable TV contracts. Small leagues couldn't compete.

By the 1980s, only one of the old regional NWA leagues was still in existence, operating in the Southeast. This league essentially became the NWA. Media mogul Ted Turner purchased it and changed the name to World Championship Wrestling (WCW). He pitted WCW's televised events against McMahon's WWF, and for a while, WCW was on top. It drew top talent away from the WWF and beat them in the ratings.

Several factors, including poorly conceived storylines and a federal investigation for steroid distribution (for which McMahon was eventually cleared) brought the WWF to its low point. However, McMahon recovered with creative angles and young, talented wrestlers. In 2001, he purchased WCW, taking control of the wrestlers, trademarks and video library. Today, the WCW no longer exists.

One other league had a major impact on pro wrestling: Extreme Championship Wrestling (ECW). A minor league based in a Philadelphia bingo hall, ECW gathered the attention of fans through late night broadcasts on local sports networks. ECW promoted a "hardcore" style, with wrestlers performing daring, dangerous moves that at times seemed completely insane. Gone were the cartoonish characters of the WWF. ECW featured beer-guzzling lunatics, ladder matches in which the ladder's only function was as a weapon, and an obsession with smashing each other's bodies through tables, usually after a flying leap from the top rope. ECW never made very much money, and it only existed for about five years before the company went bankrupt. But the popularity of the hardcore style had a huge impact on the WWF (now World Wrestling Entertainment (WWE), due to a lawsuit by the World Wildlife Fund). Vince McMahon, Jr. bought ECW, and a grittier style of wrestling moved to the mainstream.

In the next section, we'll check out some of the most famous pro wrestlers throughout history.