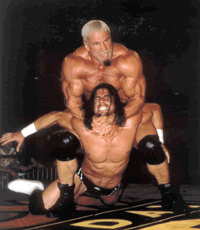 Scott Steiner puts a victim in his finishing hold, the "Steiner Recliner" -- a variation of the camel clutch.
Photo courtesy The Official Site of Scott Steiner

The most important thing to know about the rules of professional wrestling is that they can be changed, disregarded, made up on the spot or broken at any time. As long as the referee is looking the other way (and it seems like he always is), anything goes. There are a few general guidelines, though. For example, most matches have a time limit of 20 minutes.

The standard way to win a match is by pinfall. You might hear a match described as "one-fall" or "three-fall." A one-fall means that whoever has their shoulders pinned to the mat for a count of three loses the match. A three-fall is the best two out of three.

Wrestlers can also lose by submission. This happens when their opponent puts them in a submission hold, a maneuver that locks the other wrestler into a painful position. Eventually, he or she will signal to the referee that the pain is too great, and they simply give up. A wrestler who is rendered unconscious (by a sleeper hold, for example) is assumed to have given up.

The Boston Crab and its variations are popular submission holds.

Sometimes, wrestlers are disqualified (DQed). This is a grey area -- there are plenty of rules for disqualifications, such as standing outside the ring for too long, using a foreign object, or receiving help from another wrestler. Whether or not anyone is actually disqualified for these things depends on what the writers have cooked up for the current storyline. In some cases, a DQ is not considered a loss. The match ends without any proper resolution. For example, sometimes a heel with a championship belt will intentionally get DQed if it looks like he might lose the match. The DQ means he didn't technically lose, so he keeps the belt.

You might notice some wrestlers put an arm or leg onto the rope when they are pinned, forcing the ref to stop counting. This is an old rule in which any hold or pin must be broken immediately if the opponent manages to get some part of his or her body onto the rope.

The Iron Claw, or clawhold, was a finishing hold used by old-school Teutonic heels like Baron Von Rothke.

Tag team matches have their own set of rules, but most wrestlers abuse and disregard them. A tag team match pits a pair of wrestlers against another pair (or even three-on-three). Only one wrestler from each team is supposed to be in the ring at the same time, and this wrestler is the only one who can legally pin the opponent for a pinfall victory. Teammates must tag each other's hands to switch to a new wrestler in the ring, with ten seconds to make the change.

There are dozens of specialty matches, each with their own rules. These are often made up specifically for one match. In a ladder match, a championship belt or other prize is hung far above the ring, reachable only via a tall ladder in the center of the ring. The first wrestler to claim the prize gets to keep it. The winner of a steel cage match is generally the first performer to escape the cage, although some matches allow for wins by pinfall or submission. The WWE's popular Royal Rumble matches dump a horde of wrestlers in the ring at once. Anyone physically thrown over the top rope and out of the ring is eliminated, and the last wrestler in the ring wins.

In the next section, we'll learn how professional wrestlers "sell the show."