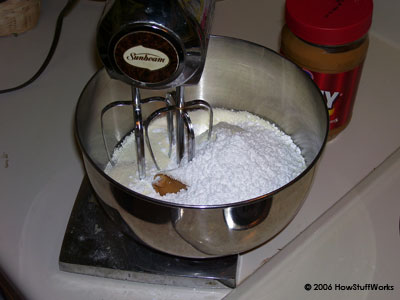 To make peanut-butter dough, just mix the ingredients ­in a mixer.

(We found this recipe at Lisa's Kids Page.)

Our second test recipe uses peanut butter, light corn syrup, powdered milk and powdered sugar. After reviewing the sugar-heavy list of ingredients, we suspected that the result would be a sticky mess.

However, the peanut oil found in peanut butter adds a substantial amount of lubrication. The recipe's moist ingredients -- the peanut butter and the corn syrup -- are also fairly thick. The result is a cohesive ball of peanut butter dough that quickly sets up enough to bog down a mixer.

Surprisingly, the peanut butter dough isn't sticky -- it's oily. Even though it appears dry at first, it becomes oily to the touch within a few seconds of kneading. It also requires refrigeration, and the resulting dough is like a stiff, cold log. It's also brown, so you can't really add color.

On the other hand, it's edible, except by people with peanut allergies or diabetes, and unlike the other recipes, it tastes very good. In fact, the main benefit of this recipe is its flavor. Its oiliness doesn't encourage lots of play, but its taste encourages lots of eating. It's more like a dessert than a modeling compound.

A similar recipe uses honey instead of light corn syrup.