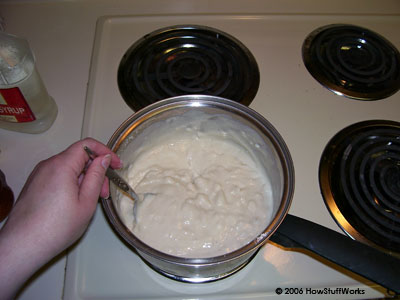 To make this recipe, simply mix all the ingredients in a pot on the stove. Stir over medium heat until it makes a doughy ball.

In the interest of science, we made several of these recipes. We wanted to explore how their ingredients and consistency compare to that of store-bought Play-Doh compound. We also wanted to judge the all-important factor of flavor -- after all, just because Play-Doh compound isn't made for eating doesn't mean that people don't eat it. Here's what we found.

(We found this recipe at Kids' Turn Central.)

The first recipe we tried used flour, cold water, salt, vegetable oil, and cream of tartar. Like Play-Doh compound, this dough is a mix of starch, water, salt and a lubricant, and it uses heat to help the starch gelatinize. But one of the most important ingredients in the recipe is cream of tartar, another term for acid potassium tartrate. Cream of tartar is a byproduct of wine fermentation, and it's used in cooking to stiffen liquids like egg whites. In this recipe, it makes the dough stronger and stiffer.

The finished product, after a little kneading, is a cohesive ball.
Food coloring can add a range of color, although the color isn't as bright as in store-bought modeling compounds.

The cooking step is a little challenging -- you need to stir the mixture constantly. After a while, it becomes a thick, hard-to-stir mass that may stick to some cookware.

This recipe produces dough that's pretty fun to play with. It's a little stickier to the touch than store-bought Play-Doh compound, but it has about the same softness and can be kneaded easily. The dough also holds its shape very well, thanks to the cream of tartar's stiffening ability. Although all of its ingredients are edible, it does contain a lot of salt.

In the next section, we'll take a look at an edible Play-Doh recipe.

Play-Doh compound comes in a wide range of colors. With a little patience you can blend colors to create new options -- the pink and green used in this flower are both blends of two colors. You can add color to homemade dough by adding a few drops of food coloring or some sugarless, powdered drink mix.