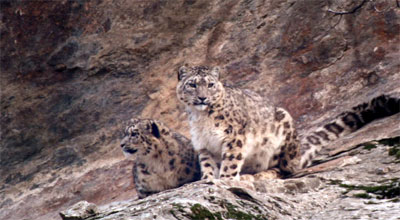 The elusive snow leopard in the mountains of Pakistan made for a challenging filming experience.
BBC/DCL

The unpredictability of the animal kingdom was one of the many challenges the "Planet Earth" team faced. Waiting for days, weeks and months without getting the footage they needed was one of the more frustrating aspects for the filmmakers. But many times, just when they were about to give up hope, Mother Nature came through.

The breathtaking shots of Venezuela's Angel Falls, the world's highest waterfalls, came on the fourth and final attempt. The falls are typically shrouded in cloud cover, but on the last pass, the skies opened, and there was a 45-minute window in which the crew captured the footage.

It was on the final day of filming that cameraman Doug Allan got the shot of a polar bear descending the mountain with her cubs to start the long journey to the sea. Likewise, the crew that sought to find the tree frogs of Costa Rica searched high and low for a month with no luck. They thought they were going to go home empty-handed, but on the final day, they got a tip from a local who led them to frog nirvana. There were thousands of frogs of a dozen species, and the two-man crew shot till sunrise.

Even though the budget accommodated lengthy waits, there was a limit, and the crew in Botswana had reached it. They were looking to film wild African dogs hunting impala. The crew spent two weeks filming and more than 50 hours in the air with the heligimbal -- with little success. Producer Mark Linfield's patience paid off, as they captured the hunt in the final ten minutes of the shoot.

Any filmmaker can tell you that dumb luck often plays a part in the success of the project. This was the case with the amazing footage of the snow leopard hunting markor mountain goats in the mountains of Pakistan. The crew had arranged for a helicopter to pick them up after six weeks of filming markor in their extreme mountain habitat. They had some good footage, but none of the elusive snow leopard -- an animal that's rarely been caught on film. When the transport helicopter didn't show up, the crew set up their cameras one last time and was handsomely rewarded. Not only did they get footage of a snow leopard, but an exciting hunt and chase over near vertical terrain -- all in the final hour of the final day. The helicopter arrived the following day to transport the elated team back to base camp.

To learn more about the Discovery Channel and the world around us, you can look at the links on the following page.