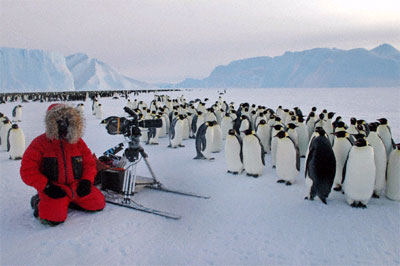 A BBC cameraman spends some quality time with the emperor penguins of Antarctica.
BBC/DCL

Early conversations with "Planet Earth" camera crews may have gone like this: "So you want me to spend a year buried in a snow shelter, in weather 60 degrees below zero with 125 mph winds, to film thousands of penguins huddled together like a rugby scrum?" What's surprising is that the answer was a resounding "Sign me up!" Camera crews endured conditions that many living things can't even survive, often for long periods of time away from any human contact. From the bitter cold of the Antarctic tundra to the smoldering heat of the African plains, the "Planet Earth" team gave new meaning to the expression "suffering for your art."

Cameraman Wade Fairly and biologist Fred Oliver lived at the far reaches of Antarctica's Macey Island for a full year to capture the behavior of the emperor penguin. Their makeshift home was an old freight container about three and a half miles from the penguins' roost. They commuted on ATV quads each day using a GPS unit to find their way through the blinding snow. The harsh conditions they endured paid off with images of 10,000 penguins packed together for survival, protecting their fragile eggs.

In Costa Rica, the crew waited in the humid jungle every night for almost a month to film the calling of the lemur tree frog -- with little luck. The cameramen were forced to reverse their sleep patterns to coincide with the nocturnal amphibian. Only after being led to a private pond and convincing the caretaker to let them in were they able to get the footage they needed.

Another challenge the crews faced was in the quarters they shared. Huts and tents became their home away from home. Even though most of the crew was experienced in wildlife filmmaking, the rigors of "Planet Earth" tested everyone's mettle. The home-base production team thought to send hundreds of wet wipes for "bathing" when they sent a team to the wintry Gobi desert. Unfortunately, frozen wet wipes didn't have the desired effect. As a result, living with unpleasant odors became second nature to most of the teams.

It wasn't just wet wipes that would freeze. Anything not tucked into sleeping bags iced over. This meant that cameramen had to sleep with a variety of things every night -- camera batteries, water and even urine bottles. If they forgot the latter, they had to thaw them by the fire the next morning -- not a pleasant task. Nuts, energy bars and dried meals served as the menu. Some sneaked vodka into their stash to warm their bellies.

Aside from the weather and the housing, the crews also withstood dizzying heights and dramatic depths. The sky team at Mount Everest tested the limits of high-altitude flying and filmmaking. Filmmakers in Mexico took the plunge into the world's deepest cave -- the Cave of Swallows -- at nearly 1,300 feet down. One crew survived what National Geographic calls the "cruelest place on Earth": Africa's Danakil Desert. Virtually no life can exist here, the lowest and hottest place on the planet. Dallol Springs might sound like a nice vacation destination, but it's actually a toxic landscape of living lava, situated on the world's lowest active volcano in the middle of the Danalki. The crew had little sleep there, as one crew member described it as trying to nap on top of a "boiling cauldron" [source: Nicholson-Lord].

In the next section, we'll look at the logistics involved to pull off "Planet Earth."