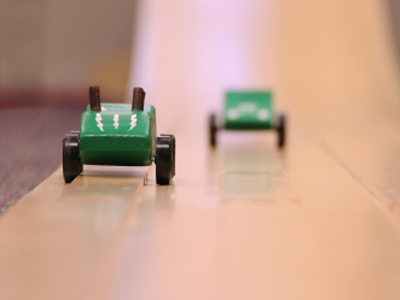 Wooden tracks, like this one, generally provide a slightly slower race than events run on metal tracks.
©­iStockphoto.com/Loretta Hostettler

Pinewood Derby tracks, even officially sanctioned Pinewood Derby models, come in a bewildering array of designs and styles but most adhere to a few basic parameters:

Tracks are generally made from wood or aluminum, and break down into smaller sections for easy storage and transport. Aluminum tracks are typically longer than wood tracks and offer a faster race. A wood-surfaced track can be faced with Formica or Masonite, or even sheathed in aluminum. The curve usually constitutes about a third of the total length with a straight, flat section of track and a braking area beyond the finish line making up the rest of the distance.

Like the cars, the tracks have taken on the trappings of modern technology. Stuart Ferguson formed Micro Wizard in 1991 to supply Pinewood Derby racers with microelectronic finish line timers. His son was a scout and he said he found races were often too close for human perception, or mechanical tools, to call. "About every 40 races you see a win separated by about 1/1000th of a second," Ferguson said. "That's a tight race, and you sometimes heard stories about fights breaking out [between parents]. It really is humanly impossible to judge a race that close objectively."

His small timer company grew from a basement endeavor to separate facilities with three fulltime employees, including his son, and expanded into track manufacturing. He estimated an aluminum track and timer set-up could run about $2,000. His tracks, built using a thicker aluminum, use weights to create the curve in the run.

With an insight into building and racing, Ferguson said there were a few common tactics to give an edge to a race. "No one wants to break the rules," he said, "but people do bend them." Those tactics include adding weight to the cars -- the weight is ideally placed at the rear of the car to give it a longer running distance and more momentum on the down slope by pushing rather than pulling the car -- or slightly canting the car, so only three wheels actually touch the track at one time. This reduces the overall rolling resistance or friction.