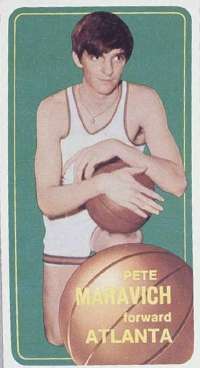 Pete Maravich was to the LSU Tigers what Paul McCartney was to Wings. He was the whole show. See more pictures of basketball.

Pete Maravich failed to fulfill his father's dream that he become the best basketball player ever, but his effort wasn't in vain. A showman renowned for his floppy sweat socks and audacious moves, Maravich rewrote the NCAA record books. He played 10 seasons in the NBA, once leading the league in scoring.

But injuries and the burden of expectations took their toll. After his retirement in 1980, a bitter "Pistol Pete" turned his back on the game he once played with joyful abandon.

At Louisiana State University -- where he was coached by his father, Press, a former professional basketball player in the days before the NBA -- Maravich demolished the NCAA scoring record with 3,667 points in 83 games, a 44.2-point average.

A whirling dervish in sneakers, he zipped passes behind his back, dribbled through double-teaming defenses, launched 40-foot jump shots, and even tossed up hook shots from the corner.

Maravich scored 48 points against Tampa in his varsity debut in 1967 and never looked back. One night against Kentucky, he had 64 points. Another night, he had 69 against Alabama. Oregon State decided the only way to beat him was to foul him. Pete went to the foul line 31 times and made 30, a record that still stands.

"In the history of college basketball," wrote Sports Illustrated's Curry Kirkpatrick, "there have been other marvelously talented players -- Wilt, Russ, Elgin, Big O, West, the Bird -- but at the top of his game, when he was smoking out another outrageous 50-point night, absolutely nobody, no time, nowhere approached Maravich."

Pistol Pete was born June 22, 1947, in Aliquippa, Pennsylvania. He became immersed in basketball at an early age and was a sensation by the time he reached high school. Given his pick of colleges, he chose LSU. In his final season with the Tigers, he won the Naismith Award as the nation's best player.

After selecting Maravich with the third pick in the 1970 NBA draft, the Atlanta Hawks outbid the American Basketball Association -- and the Harlem Globetrotters -- for his services. In the process, the Hawks alienated some of their veterans, who resented Maravich and the nearly $2 million management gave him.

Maravich survived a rocky season, averaging 23.2 points. "He's going to be much greater than Jerry West," said Hawks forward Bill Bridges. "He drives better, he handles the ball better, he's quicker." Maravich stayed four seasons in Atlanta, scoring at a steady clip, but the Hawks never left the middle of the pack. Fans blamed Pistol Pete, and for the first time in his life, he heard boos.

When the NBA added an expansion team in New Orleans for the 1974-1975 season, the Hawks traded Maravich to the Jazz for a package of two established players and four draft picks. In 1976-1977, the year the NBA merged with the ABA, Maravich averaged 31.1 points to lead the league and had a 68-point game against New York. His career unraveled quickly.

Less than three years after leading the NBA in scoring, and a year after undergoing knee surgery, he was released by the Jazz. Maravich played his last games with the Boston Celtics in 1980, then retreated from public life. Basketball historian Nelson George wrote of Maravich: "He's probably the closest thing we'll see to a combination of Marques Haynes and Earl Monroe." The problem with Maravich, George wrote, was that he didn't share the ball freely.

It became a no-win situation: If Maravich scored 40 points, he took too many shots, and if he scored 20, he didn't shoot enough. So he kept shooting. After basketball, Maravich became a health enthusiast and born again Christian. He died of heart disease while playing a pickup basketball game in Pasadena, California, January 5, 1988. He was 40. His last words before being stricken: "I'm really feeling good."

In college, "Pistol Pete" Maravich scored at least 50 points 28 times, an NCAA record that has never been challenged. But his most memorable game occurred in the NBA, when he scored 68 points against the New York Knicks on February 25, 1977. At the time, it was a record for a guard and only Wilt Chamberlain and Elgin Baylor had ever scored more points in an NBA game.

The 68 points against New York was remarkable because the Knicks' backcourt, featuring Walt Frazier, was renowned for its defense. Maravich made 26 field goals and 16 free throws. Had the 3-point rule been in effect, he would have scored close to 80 points.