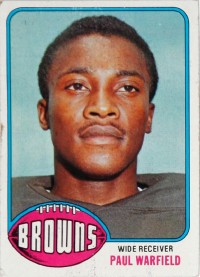 Paul Warfield is recognized as one of the premier wide receivers ever to have played in the NFL. His career totals for number of catches don't seem to be in line with those accumulated by other great receivers. However, as any student of the game should understand, the truth isn't always in the numbers.

Because of his blazing speed, elusive moves, and great leaping ability, defenses more often than not found it necessary to double-team Warfield. A long-ball threat, he intimidated the opposition.

His mere presence on the football field proved to be almost as beneficial to the running game as it was to the passing game. The best example of this may have been in 1972 when the Dolphins posted their remarkable 17-0 season.

During that campaign, Miami ran the ball 613 times while passing on just 259 occasions. Their philosophy was to use the forward pass as a threat to make the ground attack more effective. The Dolphins rushed for a then-NFL-record 2,960 yards.

As a rookie with the Browns, Warfield caught a career-high 52 passes. His outside speed was the perfect complement to the power running of fullback Jim Brown. Together, they led the Browns to their first NFL title in nine years.

During Warfield's first six years with the Browns, the team posted an impressive 59-23-2 record and played in five conference championships, as well as the 1964 championship game.