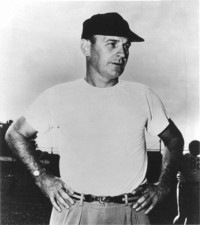 Paul Brown was an ordinary player but an extraordinary coach. See more pictures of football.

Paul Brown's cool, strict personality put some people off. Away from football, he could be charming, but on the field he was all business. Brown won no congeniality awards, but he won football games everywhere he went.

Brown (1908-1991) was an ordinary player at Miami University in Ohio. His talents were cerebral rather than physical.

Hired as an assistant football coach at Severn Prep School in 1930, he helped head coach Bill Hoover compile a 16-1-1 record over two seasons and then returned to his high school alma mater at Massillon, Ohio, where he became a legend.

Over nine seasons, his teams went 80-8-2 and won several state championships. In 1941, he became head coach at Ohio State. At first demeaned as only a "high school coach," Brown won the national championship in his second year at Columbus. During World War II, he coached the Great Lakes Naval Training Station to one of the best records among service teams.

Hired as coach of the Cleveland professional team in the newly formed All-America Football Conference, Brown produced an unequaled record of success. The Browns (from a "name-the-team" contest sponsored by a newspaper) won four straight AAFC titles, then entered the NFL in 1950 and won the championship in their first year. In Cleveland’s first eight NFL seasons, Brown’s club won three league championships and seven division crowns.

Among the many innovations Brown introduced were the scientific study of films, modern pass-blocking techniques, written intelligence tests for players, a "messenger guard" system for sending in plays, and many new passing schemes. Although he had experienced only one losing season, Cleveland owner Art Modell fired him after the 1962 season, stating that the game had passed the coach by.

Five years later, in 1968, Brown came back to pro football as founder and coach of the AFL expansion Cincinnati Bengals. With a roster made up mostly of castoffs and raw recruits, the coach "the game had passed by" won a division title in 1970 and repeated in 1973.