Browse the article How Paintball Works 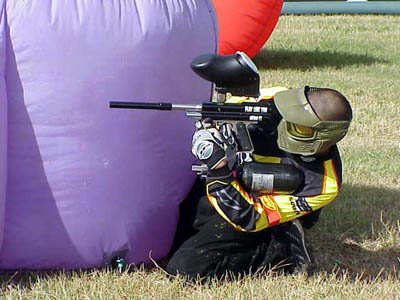 Since its introduction in the 1980s, paintball has become a worldwide phenomenon. Enthusiasts have formed teams, set up leagues and organized game tournaments. Paintball is still a long way from the popularity of older sports like basketball or football, but new paintball playing fields and organizations are popping up all the time.

The main thing that sets paintball apart from other sports is the equipment involved: You don't find guns and paint projectiles in too many traditional sports. In this article, we'll look at this equipment to see what is involved in a paintball attack. We'll also find out about the basic game of paintball, as well as some of the other uses of paintball equipment. 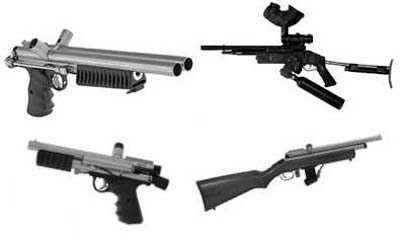 Modern paintball guns come in all shapes and sizes, in both rifle and pistol designs.
Photo courtesy WARPIG.com

The most basic piece of paintball equipment is the paintball itself. Just as in tennis or soccer, the ball is the central element of a paintball game. But unlike these older games, paintball has dozens, often hundreds, of "balls" in play at any one time. As the name implies, these balls are actually tiny containers of paint.

Paintballs have an incredibly simple construction. They're actually a lot like gel-cap pills, or bath-oil beads. They consist of a glob of colored liquid encased in a gelatin capsule. The "paint," which comes in many colors, is non-toxic, biodegradable and water soluble (so it will wash off skin and clothing).

Basically, a paintball is like a small water balloon, weighing only a few grams and measuring only 0.68 inches (1.7 cm) in diameter. The capsule holds up if you handle it or drop it from a short distance. When you shoot a paintball from a gun, however, it bursts on impact and leaves a 6-inch (13-cm) splatter of paint.

The job of the paintball gun, sometimes called a marker, is to get the paintball moving at a high rate of speed. In the basic gun, the propulsion system is compressed gas. This gas, which can be compressed carbon dioxide (CO2), nitrogen (N2) or ordinary air, is stored in small cartridges or larger tanks that can be attached to the gun. The gun is also attached to a hopper, which holds the paintballs.

Different guns have different firing systems, but the basic idea in all of them is the same. The gun is cocked in some way so that a paintball can fall out of the hopper and enter the gun's barrel. Then a small burst of compressed gas is released into the barrel, just behind the paintball. The compressed gas pushes the paintball from behind with much greater force than the air on the other side of the paintball, so the paintball is propelled forward.

In order to make the game safe, the power of paintball guns is strictly regulated. Guns in play are adjusted so that the top speed of the fired paintball is 300 feet (91 m) per second. A paintball moving at this speed is unlikely to cause serious injury if it hits your skin, though it will sting and may leave a bruise. Also, since wind resistance starts slowing the paintball down as soon as it leaves the gun, it has a reduced impact when fired from a greater distance. Speeding paintballs can cause serious injury to the eyes or ears, so paintball players always wear head protection.

The relatively slow projectile speed significantly limits the range of paintball fire: The paintball will fall to the ground in a much shorter distance than a faster projectile, such as a bullet. For this reason, firing a paintball gun is a sort of hybrid between firing a gun and throwing a ball. To hit somebody at a distance, the shooter has to tilt the gun up a little bit, so the paintball flies up in the air in an arc, like a football, and comes down on the target.

There are a variety of gun designs on the market, each with a slightly different system, but they are all based on the same principles. In the next section, we'll find out how guns generally work by examining the specific mechanism in a basic "pump" gun, a design that dominated paintball in the game's early days.

The Way of the Gun 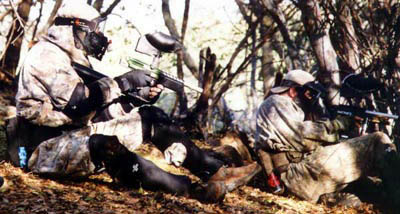 Players lie in wait for members of the rival team. Winning in paintball requires a combination of weapons skill and strategic planning.
Photo courtesy WARPIG.com

In the last section, we saw that paintball guns propel paintballs with a quick burst of compressed gas. In the animation below, you can see how this process occurs in a conventional pump-action gun.

In the middle of the gun, there is a long valve tube. This runs from the barrel, where the paintballs are loaded, to a chamber at the back of the gun, where the gas cartridge is connected. Along this path, the tube passes through the bolt, a spring, the hammer and, at the gas-intake end of the gun, the valve seat. At the barrel end of the gun, the tube is always open. But the openings at the other end, which are positioned along the sides of the tube, are blocked off by the surrounding valve seat. The tube is held in position by a cup seal, pushed against the tube by a small spring and the pressure of the gas in the chamber.

When the gun isn't cocked, the bolt extends into the barrel, blocking the entryway for the paintballs. To cock the gun, the shooter pulls the bolt backward, pushing against the spring so that the bolt butts up against the hammer. This motion does two things:

After pulling the bolt back, the shooter pushes it (along with the hammer) forward. To fire the gun, the shooter pulls the trigger. The trigger pushes up against the back end of the sear, so the front end moves down. This releases the hammer from the bolt, and the spring rapidly propels the hammer backward. As the hammer moves backward, it pushes on a raised lip around the valve tube. This propels the valve tube backward with a burst of force that is greater than the forward force exerted by the rear spring and gas pressure. The valve tube is pushed back for an instant until the spring pushes it back into place. In this instant, the side openings on the tube are exposed, and the pressurized gas can flow through to the barrel. This burst of gas is strong enough to propel the paintball forward at a good rate of speed.

In autococker paintball guns, an adjustable valve automatically diverts compressed gas to the front of the gun after it is fired. This gas serves to push the bolt back again, so the gun recocks. This way, the shooter doesn't have to recock the gun with every shot. Automatic guns use the compressed air, or in some cases an electric motor, to continually recock and fire the gun as long as the trigger is held down. To find out more about these sorts of guns, check out WARPIG.com.

As paintball has evolved, the equipment has become more and more sophisticated. In the next section, we'll look at the history of paintball to find out when and why the game was invented. We'll also look at how the game is played and at other uses of paintball equipment. 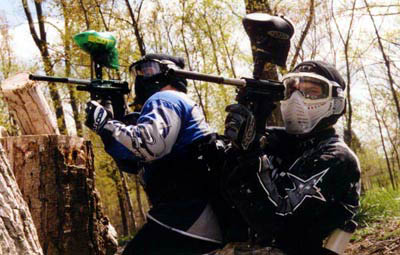 Paintball is usually played as a team sport. Rival teams attempt to capture the other team's flag, while defending their own.
Photo courtesy WARPIG.com

Originally, paintball guns weren't intended for sport. The first guns were developed in the 1970s for use in forestry and agriculture. Foresters used the guns to mark certain trees (for research, planning trails). The guns were also used by farmers to mark cattle.

In this game, which is still the predominant paintball activity, two teams try to find and steal the other's flag while protecting their own flag from capture. Players are "out" of the game when they get hit with a paintball, and the referee decrees that they are down. Referees are also there to make sure nobody makes physical contact with another player: This is one of the most important rules. A paintball game typically lasts from 15 to 40 minutes, but players may play for six hours or more at a stretch. You can hold a paintball game with only a few people on each team, or with hundreds of people on each team. To find out about other variations on the game of paintball, check out DirectPaintball.com.

One of the most important developments in the history of paintball has been safety equipment. When a paintball hits you on the body, you feel a brief sting. But a paintball round in the eye could actually "knock your eye out." In the early days, many players wore no eye protection at all, and others wore only basic safety goggles. These days, paintball players usually wear full face masks and helmets. This protects them from damage to the eyes, ears, nose and mouth. Just as in football and hockey, safety equipment is absolutely necessary in paintball.

In addition to recreational use, paintball has become a part of military and police training. In terms of feel and handling, a paintball gun has little in common with an actual firearm, but paintball is still good training for combat situations. Mainly, it lets soldiers and police practice strategy, camouflage and the fine art of not getting shot.

To find out more about military paintball use, as well as paintball games, organizations and equipment, check out the links on the next page. The proliferation of paintball Web sites is strong evidence that the sport is still on the rise. And the enthusiasm and ingenuity of the amateur gun-designers who are showing their work on the Web bodes well for the continued evolution of the equipment and the game of paintball itself.

For more information on paintball and related topics, check out the links on the next page.