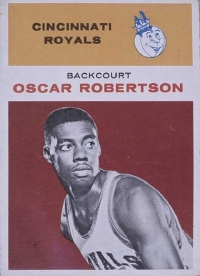 In the opinion of many, Oscar Robertson was the best all-around player in basketball history. He scored almost at will, rebounded like no other guard the game has seen, and retired as the leading assist man in NBA history.

Robertson piled up triple-doubles before triple-doubles were cool. During the 1961-1962 season, his second as a pro, "The Big O" averaged a triple-double, registering 30.8 points, 12.5 rebounds, and 11.4 assists a game.

In 1960, Robertson entered the NBA along with guards Jerry West and Lenny Wilkens. All three eventually landed in the Hall of Fame. Wilkens was the consummate playmaker, West was a jump-shooting wizard, and Oscar was a little bit of everything. He stood 6'5", weighed 220 pounds, and was strong as an ox. He scored from the outside with jump shots and from the inside with either hand.

One of his specialties was the pump-fake. He had a knack for getting his man into the air and drawing fouls, and he was 84 percent accurate from the foul line. During a game in 1964, he went to the line 16 times in one quarter, an NBA record.

Intensely competitive, Robertson yelled at teammates, badgered opponents, and berated officials. He was notorious for complaining whenever the zebras whistled him for a foul. It seemed that The Big O thought he was too good to make a mistake.

At the University of Cincinnati, where he was the first African American to play basketball for the school, Robertson set 14 NCAA scoring records. He led the nation in scoring in each of his three seasons with the varsity.

Overall, he averaged 33.8 points and 15.2 rebounds. After his senior season, he won a gold medal with the U.S. team at the 1960 Summer Olympics in Rome. It was a foregone conclusion that Robertson would stay in Cincinnati to play professionally.

The Royals claimed him in a territorial draft instituted by the NBA to help attendance by keeping local stars at home. Robertson assimilated quickly into the NBA's upper crust. A deft playmaker and willful leader, he was considered the heir apparent to Celtics great Bob Cousy.

A Cincinnati rock-and-roll band created a dance called "The Big O" ("dribble to your left, dribble to your right..."), and attendance at Royals games surged in the early years, but the glow soon faded. Even with a player as great as Robertson, the Royals were habitual losers and Cincinnati proved to be a lousy basketball town, eventually losing the franchise in 1972.

In 1970, the Royals ran Oscar out of town after he feuded with Cousy, who became the team's coach in 1969. So anxious were the Royals to dump their future Hall of Famer that they traded him to Milwaukee for Flynn Robinson and Charlie Paulk. Cincinnati's loss was Milwaukee's gain.

In 1971, Oscar led the Bucks to the NBA championship in the franchise's third season in existence. He averaged 19.4 points, more than 10 points below his career norm, as he concentrated on controlling the offense and setting up Lew Alcindor inside. In the process, the Bucks became the first NBA team to shoot better than 50 percent from the field for a season.

Robertson's output and effectiveness dipped the next two seasons, leading to his retirement in 1974. He was elected to the Hall of Fame in 1979 and named to the NBA's 35th Anniversary Team in 1980.

Even at the beginning of his career, gaining respect and maximizing his earning potential were important to Robertson. He chose the University of Cincinnati largely because the Bearcats regularly played games in large cities in the East. So it was especially important to Oscar that he play well in his first appearance at New York's Madison Square Garden, the citadel of college basketball.

Eleven games into Robertson's first college season, the Bearcats traveled to New York to face Seton Hall. Oscar exploded for 56 points, the most by any player, college or professional, in the Garden's 10-year history. As a senior, he scored 62 points in a game against North Texas State. His NBA high was 56 points, scored against the Los Angeles Lakers in 1964.