Browse the article Are the Olympics ever skipped? 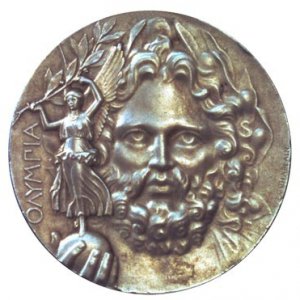 He looks mad. This is the medal awarded to first-place winners of the 1896 Athens games -- the first of the modern Olympiad. See more Olympics pictures.
Photo courtesy © IOC

War has a way of really killing the mood. And people. Lots of people. Thanks to two mammoth worldwide conflicts, the Olympic Games have, indeed, been skipped a few times. The games scheduled to be held in 1916, 1940 and 1944 -- all years when loads of countries were entrenched in World Wars I and II -- were canceled due to the massive carnage that was being carried out.

That's not a decision that the buttoned-up International Olympic Committee (IOC) takes lightly. Even when the committee decided it wanted to stagger the games so Winter and Summer Olympics were not held in the same year, but in two-year intervals, the prestigious contest wasn't skipped. Instead, the Winter Olympics were staged both in 1992 (Albertville) and in 1994 (Lillehammer) to cover the gap.

But 1916, 1940 and 1944 were grim years, and holding the Olympics ended up taking a back burner due to the very dire circumstances being played out on the world stage.

In the first case, let's set that stage. The year was 1914, and much Olympic preparation was afoot, as directed by the members of the IOC. The flag with its iconic rings was unveiled for the first time, along with the choice of the host city for the 1916 games (back then the host city didn't get the seven years' notice it does now). Ironically, the choice was Berlin. While the IOC was busy getting ready, Austria-Hungary declared war on Serbia, and the Germans were quick to join the battle, although their targets were primarily Russia and France. Belgium -- a neutral nation – was the next target. In response, Britain joined in, and the Great War was well under way.

Given the state of world affairs, British members of the IOC protested the fact that Berlin was still the top choice for hosting the 1916 games, and resigned when their demands for an alternative location were not met. At the same time, the Germans were adamant and continued plans for the VI Olympiad. They did issue a caveat though: Only nations who were on their side or neutral could participate. Several U.S. cities offered themselves as replacement sites, while other IOC members said there could be no games until 1920.

Pierre Coubertin, founder of the IOC and widely recognized father of the modern Olympics, had this to say on the matter: The IOC could not withdraw the games without consulting the designated city (which, presumably, would have to give its consent). At the same time, Coubertin noted that it was possible these particular games would not occur.

As the war trudged on, Coubertin's prediction proved accurate. The 1916 games were not held. It was, after all, "The War to End All Wars." The stadium stood silent.

Fast-forward a few decades and Germany finally got the chance to hold the games in Berlin in 1936. Meanwhile, the IOC declared an Asian nation as the future site of an Olympics. In 1940, Japan was slated to become the first country in Asia to host the games.

Rumor has it that Tokyo won the role of host city because of a bit of skullduggery. Michimasa Soyeshima, one of Japan's IOC members, reportedly met with Benito Mussolini and promised him the Japanese contingent's backing for the 1944 games to be held in Rome if he would weigh in on Japan's bid for 1940. He may have tampered with the opinions of other members, too. Of course, all this effort was for naught, as the 1944 games never happened either [source: Guttmann].

So what happened exactly? Again, the IOC refused the idea of moving the 1940 games, which became a matter of exacerbated controversy when Japan invaded China. Eventually, though, it became apparent that the games would not go forward. Martial law, at that point, ruled Japan, and decreed that the games were not going to happen. Similar circumstances afflicted the 1944 games, completely understandable given the carnage occurring at the time, and the Olympics would not again see the world stage until 1948.

Although official Olympics didn't occur in 1940 or 1944, they didn't go completely unheralded. Prisoners of war in a few European camps held covert Olympiads. Only a handful of relics survive from these clandestine games, including a flag -- small, and drawn on a Polish prisoner's shirt in crayon. In 1944, the flag of those surreptitious games was made of a bed sheet and scarves. Few could top this eloquence; the Olympic oath for these games began "In the name of all the sportsmen whose stadiums are fenced with barbed wire ... " [source: Grys].

This was an interesting article to write, if a bit of a downer at times. World Wars are not cool, guys. So don't start them! Vent international issues through Olympic competitions, please, or World Cups. Whichever. On the other hand, I'm not ashamed to admit, reading about the POW games powerfully moved me. I found that information at the last minute, by chance, and I'm thrilled I was able to share it. The human spirit is amazing and unshakable, even in the most dire of circumstances. I applaud those brave, steadfast participants.