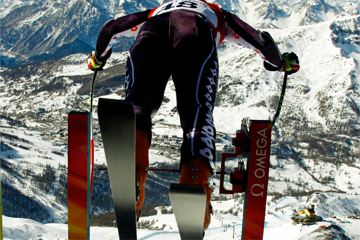 Because Olympic sledding competitors travel at speeds up to 90 miles per hour (145 kilometers per hour), they win by some of the narrowest margins. When accuracy to the thousandth of a second or better is key, and timing equipment has to withstand temperatures as low as negative 30 degrees Fahrenheit (negative 34 degrees C), special technology is required.

The track is equipped with multiple infrared emitters and receivers, which send the time to a central computer each time a beam is broken. Laser technology, while effective in the track environment, was replaced by infrared beams for the 2002 Olympics in Salt Lake City after research revealed that falling snow often tripped the laser beam and frost clouded the electric eye, reducing accuracy.

The timing technology for speed skating got a technological boost for the 2014 Sochi Olympics. Skaters wear lightweight transponders on their legs that can record their times and rankings in real time during the race [source: Omega]. The clock is triggered by the starting gun that first appeared in the Vancouver 2010 Games, and the tip of the athlete's skate will trip the photo cells to stop the time. But because speed skaters reach speeds up to 30 miles per hour (48 kph), and a skater can win by as little as the tip of a boot, two slit video cameras scan the finish line, time-stamping each image at 2,000 frames per second and sending the complete image to the judges to help determine the winners in case of a photo finish [source: The Olympic Games].

Downhill skiing competitors begin their races at starting gates, with Snowgate starting gates introduced in Vancouver. The gate has a wand or bar that only emits a starting pulse when it's at an equal angle for every skier. The timing starts the second they burst through the bar, which allows them a little leeway for their initial push [source: Omega]. As with the sledding events, an infrared beam is tripped at the finish line to stop the clock.

For the long-distance skiing events, such as cross-country and Nordic, RFID tags attached to each skier's boot send individual signals to antennas buried beneath the snow at the starting line, finish line and points in between. In this way, a skier's starting time, finishing time and progress are all tracked, recorded and broadcast, taking any time penalties into consideration. GPS satellites are also used for the Nordic competitions to measure distances between competitors throughout the race.