Sport By Sport: Cycling and Aquatics 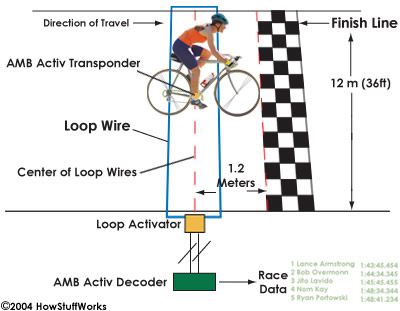 Because cycling events face timing challenges similar to that of marathons, the technology is much the same.

RFID tags, attached to each bicycle frame, emit an identification code to antennas placed at the starting line, finish line and along the road. These antennas register each rider's time and send it to the timing console for comparison. High-speed photo-finish cameras are set up at the finish line, including above the track, to provide a time-sequenced visual record of the winners, including a vertical cursor delineating the front edge of each rider's tire, to be used in case of a close finish.

Similar to the short-distance track events, each swimmer's starting block has an attached speaker to announce the activation of the clock by the timing official, or starter. In an event like the relay, the swimmer in the water must "tag" the next teammate by pressing on a touch plate located on the pool wall. The contact plates are made of thin stacks of polyvinyl chloride (PVC) and horizontal strips that register focused pressure (as from a swimmer's hand) but not dispersed pressure (as from waves in the pool). As little as 3.3 pounds (1.5 kilograms) of force is needed to activate the pad; a wave might register as 2.2 pounds (1 kilogram) [source: Park]. When the pad is activated, a signal is sent to the timing computer to record the first swimmer's time, denote the start of the second swimmer's time and report the time to the scoreboard.

The process works the same for the individual events such as breaststroke, freestyle and backstroke, during which the swimmer registers his or her time by pressing on the contact plate at the end of the run. Aquatics also use photo-finish technology similar to track events, recording an image of the finish at 100 frames per second. (That was the camera that came in so handy in Michael Phelps' 2008 win.).

Another technology that debuted during the 2012 London Olympics was the Open Water Gate for the swimming marathon. (Aren't you tired just thinking about it?) Previously, times were just given at the start and stop of the race. But now swimmers wear wrist transponders that respond to gates along the racecourse, giving times and measurements as the marathon occurs. There's also the photo-finish technology at the end of the race, so judges can determine a winner when a transponder gives times too close to call [source: Swatch].