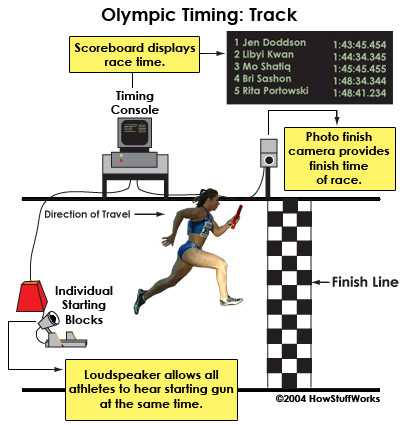 As you're no doubt aware, the Olympic Games are held every two years, alternating between summer and winter athletic events. Because of the distinctions between these events -- from distance considerations to weather concerns -- the timing technology can vary greatly from sport to sport. Let's start with summer competitions.

In sprint races like the 100-meter dash, which can last less than 10 seconds, timing is of the essence. Therefore, every aspect of timekeeping is electronic, even the starting gun. And the starting "gun" is less pistol-like than ever, since security is understandably squeamish about weapons at Olympic events. Although it may look like a label maker, this starting gun is connected to speakers equidistant from every runner, to prevent a closer runner from hearing the starting gun even a millisecond before a runner farther from the gun. But no fear -- the sound still mimics a pistol [source: Lecher]. It's also integrated with the timing system to avoid discrepancies.

At the other end of the race, a laser is projected from one end of the finish line to the other, where a light sensor, also known as a photoelectric cell or electric eye, receives the beam. It works by having the two photo cells (set at different heights to avoid only recording an arm movement) aligned with the finish line. As a runner crosses the line, the beam is blocked, and the electric eye sends a signal to the timing console to record the runner's time.

One serious improvement to Olympic timing technology that's used in many events is the Scan'O'Vision camera. It records that "photo finish" we crave at a competitive Olympics. Unlike the old film camera, these use digital recording technology. They scan an image through a thin slit up to 2,000 times a second [source: Omega]. When the leading edge of each runner's torso crosses the line, the camera sends an electric signal to the timing console to record the time. The timing console sends the times to the judges' consoles and an electronic scoreboard. The images themselves are sent to a computer, which synchronizes them with the time clock and lays them side by side on a horizontal time scale, forming a complete image. The computer also draws a vertical cursor down the leading edge of each runner's torso at the time the finish line was crossed. This composite image can then be broadcast on a digital display within 15 seconds of the race's end to help make a decision on a close finish {source: Omega].

In longer races, such as the marathon, the clock also starts with an electric gun. However, the large number of competitors makes it impossible for all the runners to leave the starting line simultaneously, and dozens of runners can cross the finish line at a time. Because of these considerations, marathons require a more individual system of timing -- radio-frequency identification (RFID) tags.

Look at each runner's shoe and you'll see a small RFID transponder attached to it, sending out a unique radio frequency. Have you ever noticed the mat that stretches over the starting line at a marathon? It contains loops of copper wire that function as an antenna, picking up each runner's signal and sending the identification code and start time to the timing console. Mats track each runner's progress every 3.1 miles (5 kilometers), automatically displaying the best times on the scoreboard. Another mat sits at the finish line and records each runner's finish time. Officials then compare each competitor's time with the time clock, which is initiated by the starting gun.

Big marathons like Boston, New York City and Los Angeles also employ this technology, provided by companies such as Texas Instruments. It should be interesting to see whether the Olympic marathon or other suitable events ever adopt under the skin RFID technology or another sort of wearable.