Browse the article How the Olympic Opening Ceremonies Work 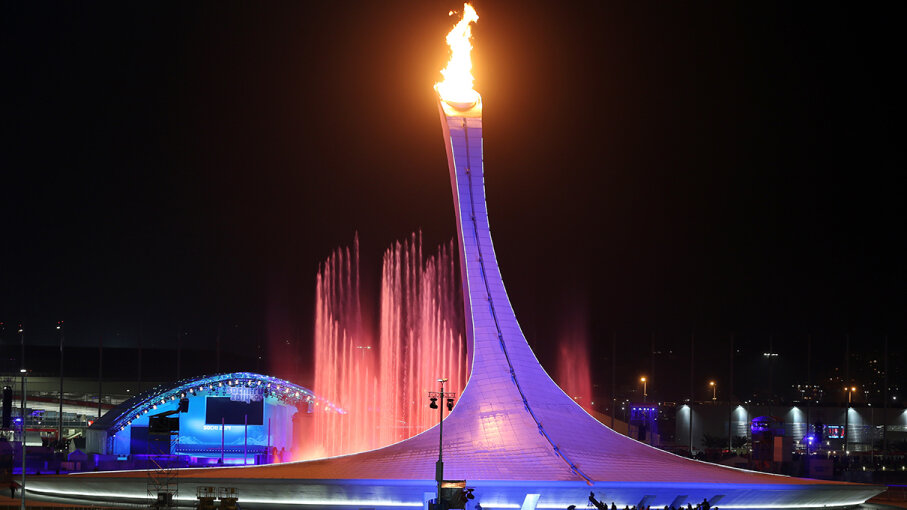 The opening ceremonies of the Olympic Games aren't just about pageantry and the parade of nations. The 1920 Summer Olympic Games were held in Antwerp, and the people of Belgium were proud to show that despite the vast devastation of World War I, the horrors of that conflict hadn't broken their spirits.

Fast-forward to 1964, and the citizens of Japan had a similar statement to make. Their final torchbearer was a young man named Yoshinori Sakai. He was born on Aug. 6, 1945, in Hiroshima — the very day that city was struck by an atomic bomb.

The Olympics in general can also be a way for nations to take a stand against perceived injustices. In 1980, for example, 65 countries refused to take part in the Moscow Summer Olympic Games [source: Time]. They were protesting the Soviet Union's invasion of Afghanistan. In fact, the '70s and '80s were a hard time for many hopeful Olympians. The 1992 Summer Olympic Games in Barcelona marked the first time in 20 years that no countries felt the need to boycott the games.

And let's use the 1992 Barcelona opening ceremony to showcase just one of the many impressive feats and performances that have occurred over the years during the commencement rituals of the games. During most ceremonies, the Olympic cauldron is lit by a torch, which is hand-delivered by some famous person or olympian. The Spaniards took an impressive gamble: Their cauldron was lit from afar by an archer with a flaming arrow. Talk about pressure to make the shot! At the 1996 Summer Olympic Games in Atlanta, famed boxer Muhammad Ali who won the gold medal as Cassius Clay in Rome in 1960, brought down the house when he lit the cauldron to start the games there.

But during the Opening Ceremony of the 2012 Winter Olympics held in Sochi, Russia, it was three-time gold-medalists figure skater Irina Rodnina and hockey goalie Vladislav Tretiak that had the honors. And they did not disappoint. The cauldron was lit in what was also quite a display of theatrics and pyrotechnical feats.

The Evolution of the Opening Ceremony 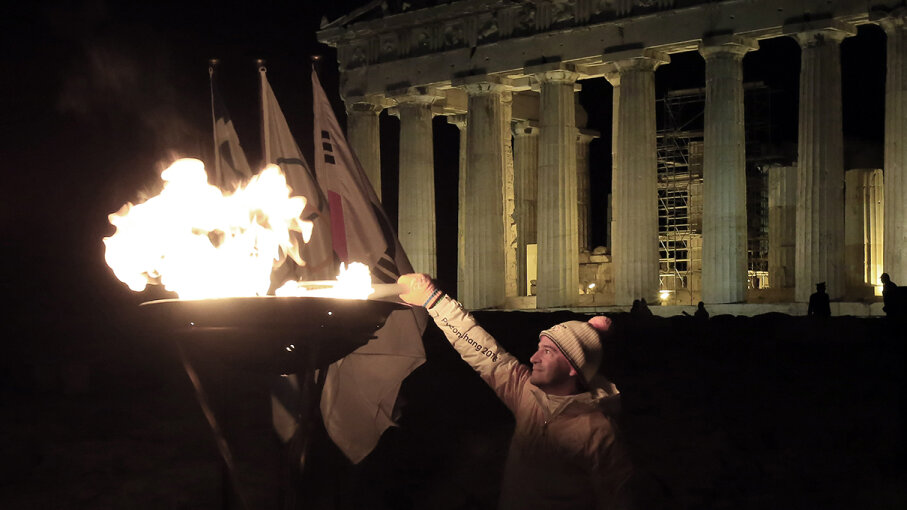 Former Olympic rings champion Dimosthenis Tambakos carries the Olympic Flame in front of the ancient temple of Parthenon atop the Acropolis hill in Athens during the torch relay on Oct. 30, 2017 for the 2018 Winter Olympics. IOC/Milos Bicanski

The opening ceremonies of the Olympic Games have evolved greatly over the years. It wasn't until the 1908 Summer Olympic Games in London, for example, that it became a tradition for the Greek delegation to lead the parade of nations and the host country's delegation to enter as the finale. Now that's how it's always done.

Another major aspect that's changed is how much money a nation needs to shell out in order to stage the opening ceremonies. Well, technically they don't have to spend extravagantly, but with billions of eyes glued to TV screens around the world and their reputations supposedly on the line, Olympic organizers tend to pull out all the stops. London's 2012 Summer Olympic Games opening ceremony alone reportedly cost more than 80 million pounds (more than $124 million) [source: Williams]. Quite a change from when the city hosted the post-World War II games in 1948, which were nicknamed the Austerity Games.

Nowadays, the opening ceremonies have several components that are pretty much fixed. We'll go through the rundown on the next page.

What to Expect in the Opening Ceremonies Today 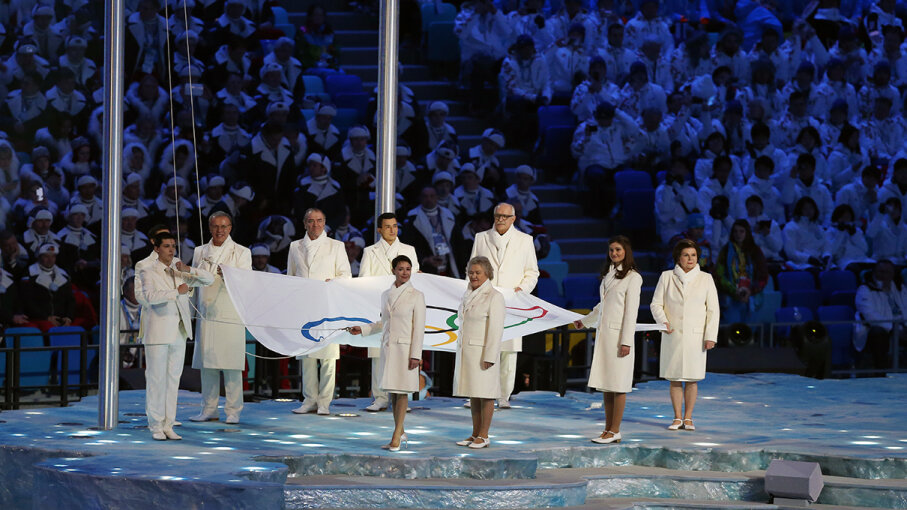 The Olympic flag must fly for the entire duration of the Olympic Games from the main stadium and in all other venues, according to the official Olympic charter. Sampics/Corbis/Getty Images

Perhaps the most memorable part of any opening ceremony is its artistic program. Usually the details of the performance are kept top secret until it begins. This segment of the ceremony is the host city's chance to show off its culture and history on the global stage. Take the unforgettable opening ceremony for the 2008 Summer Olympic Games in Beijing: 91,000 people packed the stadium nicknamed the Bird's Nest and watched as 5,000 years of Chinese history played out before their eyes.

Among the many components of the show, 2,008 drummers beat out a mesmerizing tune in perfect synchronization on percussive instruments constructed in an ancient fashion. Giant blocks representing printing blocks rose from the stadium floor and assembled into a model of the Great Wall of China. Oarsmen armed with giant paddles rowed their way up the Silk Road. All in all, some 14,000 participants performed in the ceremony, some who had been practicing and perfecting their performance for two entire years [source: Henderson].

But back to the rest of the ceremony. During the parade of nations, between the Greeks and the athletes from the host country, the rest of the delegations enter in alphabetical order — based on the language of the host country. Each delegation is fronted by both a board with the country's name and its flag. It is a great honor for an athlete to be chosen to carry his or her country's flag.

Another staple is the arrival of the torch at the stadium to light the cauldron. Pigeons — symbolizing peace — are released following that. (They used to be set free before the cauldron was lit, but several unfortunate avians got toasted one year, hence the swap.) An athlete and an official also take the Olympic Oath. The purpose of this is to pledge adherence to the rules of the games and to promise standards of good sportsmanship. One athlete from the nation hosting the games recites the pledge on behalf of all the athletes competing in that Olympiad.

Once all these components of the opening ceremony occur, the host country's head of state proclaims the games open, and it's the athletes' turn to shine.

The International Olympic Committee's Olympic Charter specifies that the opening of the games should be announced as such. For the summer games, the host country's head of state must say: "I declare open the Games of ... (name of the host city) celebrating the ... (number of the Olympiad) ... Olympiad of the modern era." If it is for the winter games, it must go like this: "I declare open the ... (number of the Olympic Winter Games) Olympic Winter Games of ... (name of the host city)." [source: IOC].

The opening ceremonies are one of my favorite parts of the Olympic Games. I love the fanfare and the commentary. (Also, occasionally, making fun of said commentary.) It's so cool to hear previews about the different athletes and tidbits about their backstories. It's interesting to see the artistic program and learn what a nation finds most worthy and intriguing to share about itself.