Browse the article What are Olympic medals made of? 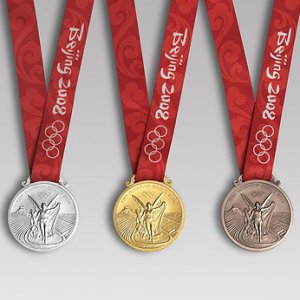 Back in the day -- way back in the day -- Olympic champions were crowned with wreaths of olive leaves following their victories. Fast-forward to the modern games, and the winners get medals for their efforts. At the first Olympic Games in Athens in 1896, top placers received silver medals since, at the time, silver was coveted more than gold. Second place competitors got copper medals.

Gold medals were first introduced in 1904 at the St. Louis Games, although it wasn't until London hosted in 1908 that the medals were awarded in the order so familiar today. Even so, the famous medal ceremony usually involved pinning on the prize, rather than plunking it around winners' necks. At the 1960 Rome Games, the medals were affixed to chains; following that, ribbons were typically the standard.

Not Your Typical Winner Takes Gold

Whether beribboned, chained or pinned, there's never been a set standard of what an Olympic medal should look like. Some design requirements have existed, true, but where composition is concerned, there has been a lot of variation over the years, plus differences in heft, size, shape or even material. In 1896, first-place athletes received medals that were not only silver, but 48 millimeters in diameter, 3.8 millimeters thick and weighed in at 47 grams [source: Olympics.org]. In Paris four years later, the medals were rectangular, 59 millimeters by 41 millimeters and weighed 53 grams. The next games, held in St. Louis, scaled things back a bit with a circular cookie cutter model that hit the scales at a mere 21 grams. Apart from those 1900 Paris Games -- an oddity in Olympic history for many reasons -- all athletes of the Summer Olympics have received round medals. The Winter Games have usually featured circular medals, too, although there have been some exceptions [source: Olympics.org].

When it comes to what materials the medals are made out of, that's been a bit fluid as well. The original medals awarded at the Athens Games of 1896 were, as mentioned, silver and copper. Over the intervening years, gold, silver and bronze became the standard, and, in fact, between 1928 and 1968, medals were close to identical apart from the host city and year of the games. During the 1972 Munich Games -- overshadowed by the murder of 11 Israeli athletes -- the identical medal tradition was broken with a new design on one side. Since then, they've been a varied bunch: In the 2008 Beijing Games, for instance, the medals included jade, a unique, culturally significant departure from the standard.

The medals of the Winter Games have traditionally been made of gilt silver (silver coated with gold) for the top prize, followed by silver and bronze for second and third place. Since the Albertville Games of 1992, however, Olympic organizers have been mixing things up a little. Winners that year received medals adorned with crystal. In Lillehammer, four years later, all three medals included portions of sparagmite -- a type of granite. Nagano featured medals with lacquer. In 2002, Salt Lake City went back to the standard gilt-silver recipe for their top champs. Since then, most winter games have followed suit [source: IOC].

In terms of the specific metals that wind up in the cocktail, current gold medals must consist of at least 92.5 percent silver and 6 grams of gold coating, per International Olympic Committee (IOC) regulations. The rest is typically copper. Silver medals these days often also have a bit of copper in them, and bronze medals also contain copper, sometimes alloyed with zinc [source: The Economist].

As far as actual cost goes, the gold Olympic medals at the 2010 Vancouver Games -- the heaviest on record so far -- cost about $500 a pop at the time. That was vastly higher than the 2002 Salt Lake City set, where the gold medals cost about $150 each, again based on the prices at the time. Most of that difference, however, can be chalked up to the rising prices of precious metals, not vast variations in composition and size. Gold medals at the London 2012 games will cost about $700, after tipping the scales at 400 grams [sources: The Economist, CNBC].

Host cities also have to consider the order size into their expenditures -- with Summer Games often having more competitors and medalists. At the 2010 Vancouver Winter Games, only about 1,000 medals were commissioned, opposed to Beijing's approximately 6,000 medals needed two years earlier. But since Beijing's medals had been significantly lighter (about 150 grams versus 500 grams), the city's entire order came to $1,091,000 -- still less than Vancouver's bill of $1,147,000. Quite the difference when you factor in the 5,000 medal discrepancy [source: CNBC].

Besides their heft, Vancouver's medals are notable for one other feature: The prizes contained small portions of e-waste. A tiny fraction, to be sure, but organizers were still proud of their contribution to promoting environmentalism.

The medals prepared for the Sydney Games in 2000 created something of a stir, particularly in Greece. The issue? The medals, which, according to their designer, had been created based on specific instructions from the Sydney Olympic Committee, portrayed a portion of the Roman Colosseum rather than the Greek Parthenon. The Sydney folks, in turn, said it was the International Olympic Committee that told them to base their design off the 1928 medals awarded in Amsterdam. Turns out those 1928 Colosseum-sporting medals were designed by an Italian.

I loved writing this article because I had never before suspected how much the medals of the games have varied over the years. How wrong I was! But I don't think not knowing this was totally my fault. As I recall, when watching the Olympics, you generally don't get an up-close look at the medals. But they truly are intricate and beautiful. Also, I want one now. Too bad I'm pretty lousy at sports ...