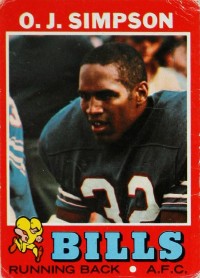 O.J. Simpson is considered one  of football's greatest runners and was inducted into the Hall  of Fame in 1985. See more pictures of football players.

O.J. Simpson's trial and controversial acquittal for the murders of his ex-wife, Nicole Brown, and Ron Goldman permanently destroyed his carefully crafted image as one of the good guys. But, though his popularity as "The Juice" is now irretrievable, the record he created in the 1970s as one of pro football's great runners remains unassailable.

Orenthal James Simpson (born 1947) was the 1968 Heisman Trophy winner and a two-time All-American at USC. The 6'1", 200-pound halfback had everything one could ask for in a runner -- terrific speed, a mystifying change of pace, surprising power, and more moves than a hula line.

The Buffalo Bills made him the No. 1 pick in the 1969 NFL draft. But when he failed to rush for as many as 750 yards in any of his first three seasons with the Bills, he was considered a major disappointment.

The problem was how he was being used -- sparingly. In quest of a balanced offense, the Buffalo coaches severely restricted the number of carries Simpson had each game. One Bills coach even wanted to switch him to wide receiver!

Then Lou Saban took over as Buffalo coach in 1972 and everything changed. Simpson began running the ball 25-30 times a game. In his first year under Saban, O. J. had his first of five straight 1,000-yard seasons. During that five-year period, Simpson won four NFL rushing titles.

After nine seasons in Buffalo, O. J. finished his career with two seasons for the San Francisco 49ers. His career rushing totals were 2,404 attempts, 11,236 yards, and 61 rushing TDs. Simpson was named to the Pro Football Hall of Fame in 1985.