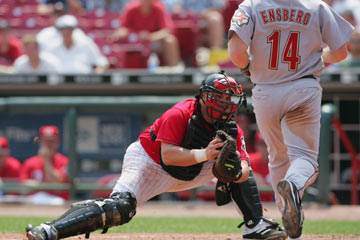 Javier Valentin of the Cincinnati Reds looks to place the tag on Morgan Ensberg of the Houston Astros in 2005. What are the nine positions in baseball? See more sports pictures.
Andy Lyons/Getty Images

Baseball is a game of numbers. Batting averages, runs batted in, strike outs...baseball fans love their stats. But another number important to baseball is nine: the number of defensive positions on the field. Let's take a look at what these nine players do, and why each one is so important to the game.

The catcher crouches behind the batter, who is on home plate. The catcher is in many ways a team leader and he keeps track of everything that's happening on the field. He sends signals to the pitcher about what pitch to throw and communicates plays to the team. The catcher also catches the ball if the batter misses it. Furthermore, he's the last line of defense when a runner is headed toward home plate because he's there to catch the ball and tag the runner out at home.

Like the first baseman, the second baseman fields balls at second base. He uses the ball to get runners out by either tagging the runner, touching second base or throwing the ball to someone else who can get a runner out.

The third baseman serves the same basic function as first and second basemen by defending third base from runners. Most batters are right handed and hit in the direction of third base, so the third baseman has to have a good arm in order to throw the ball all the way to first base.

There are three outfield positions in baseball -- the left fielder, the center fielder, and the right fielder. These are the guys who stand in the far grassy area outside of the sandy baseball diamond. All outfielders serve the same basic function: they catch long fly balls. If they catch the ball before it hits the ground, the batter is out. If they don't catch the ball in the air, they pick it up it and throw it to the infield where the infielders try to tag runners out. They also act as backups to the infielders, running in to save the day if the infielders don't get to the ball in time. Because of the shape of a baseball field, the center fielder covers the largest amount of territory, so he has to be pretty fast.

You can find more baseball goodness on the next page.

I've spent many hours watching baseball -- usually with a hot dog in one hand and a cold beverage in the other. But in all that time I never really considered all of the responsibilities each player has. I mean, who knew there were really two players covering second base (the second baseman and the shortstop) or that the guy in the mask crouching behind home plate was the one in charge? Each player has a unique skill set and is absolutely essential. That's why I was astounded to learn about MLB player Buster Posey, who once played all nine field positions in a single game while at Florida State in 2008. Florida won the game 10-0, no doubt thanks to the grand slam Posey hit (because he was an awesome batter, too).

How many ways can a batter reach first base?
How Umpires Work
10 Legendary Baseball Curses