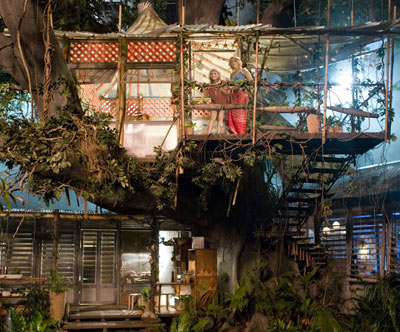 For the role of Galileo, Sea World Australia supplied pelicans that could fly on command. According to co-director Mark Levin, however, the birds weren't so easy to work with. His counterpart, Jennifer Flackett, says they posed a unique safety concern: "They find eyes to be very shiny and they like to snap at them."

A scene requiring Galileo to pick up and fly with a tool belt had to be computer-generated, as did the island's volcano. Computers also came into play in several green screen sequences -- the crew built a beach at the studio, shot the sea lion against the screen and later added him into the water shots at the beach.

"We wanted a very 1980s aesthetic," Flackett says. "How would you do it if you didn't have any CG? But when you have a shot of Jack jumping off his boat in the middle of the ocean and then cut to him underwater, which was shot in a tank, we were doing a lot of matching."

The film also incorporates real rainforest scenes with those shot on a soundstage, where production designer Barry Robison used bamboo and biodegradable plastics to construct a "green" tree house with solar and wind power and a rain-catching roof. Mist was pumped into the environment to give the set a wet, lush look.

Starting in mid-July 2007, the production spent four months on the Gold Coast of Queensland, Australia, which was chosen for its rainforests and beaches, the wild and unspoiled beauty of Hinchinbrook Island, and the availability of local crews and support infrastructure.

With the local help, the production was able to avoid periodic jellyfish invasions, but all the advance planning in the world couldn't change the unexpectedly wet winter. "There had been a nine-year drought in that part of Australia, and we seemed to have cured it," Levin says. "But you adjust. If it starts to rain, you do the rain scenes."

Co-directors (and husband and wife) Levin and Flackett -- who wrote and directed "Little Manhattan" and penned screenplays for "Wimbledon" and "Madeline" -- work as a team without clearly defined duties. "It's pretty amorphous, how we divide things," Levin says. "I might have a slightly more technical bent than Jen but, for the most part, we really just do everything together."

"They do have a division of labor and although I'm not sure they know what it is, we all know what it is," Jodie Foster says. "A lot of it is an emotional dynamic between them because they're married … it's fascinating to see how well that's worked for them."

Nevertheless, sometime director Foster can't picture co-directing with anyone. "That's not something that I will ever do," she declares. "You can totally quote me on that."