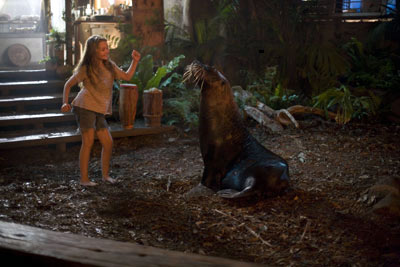 "Not all animals are created equal. If you have to work with animals, I'd recommend working with sea lions, which are lovely, trainable creatures," says co-director Mark Levin. Spud and Friday, two sea lions from Sea World Australia, shared the role of Selkie -- and they arrived on set already able to kiss, salute and hug.

But because the marine pair had no previous film experience, they had to get used to the cameras, lights and crewmen -- and get comfortable with Abigail Breslin. Trainers Katie Brock, who worked on "Babe: Pig in the City," and John Medlin had Breslin pet them and feed them fish every day before filming started. "She really trained them well. She actually got very involved in the training," says producer Paula Mazur.

Breslin, who has two dogs, two cats and a turtle and wants to be a veterinarian if the acting thing doesn't work out, bonded with the 400-pound sea lions. "They come up to you and give you kisses," she says.

The sea lions "drove the schedule and the making of the movie in a very substantial way," notes Levin. "They were not allowed to be anywhere but on the studio lot. They weren't allowed to go to the beach for fear that they would break for freedom." That necessitated an animatronic stand-in for scenes on the beach. Using Friday as a model, animatronic supervisor John Cox sculpted a facsimile covered in fur and oil, for a wet look. He also created animatronic sea turtles, taking research trips to Sea World to observe, measure and photograph specimens.

Similar stand-ins were required for a scene in which Nim slingshots several lizards into the air, but the bearded dragon playing her companion, Fred, was real -- in multiple. Five different reptiles played the part. "We rotated them," says Levin. "They're kept in kind of an igloo ice chest to stay cool, and as their body temperature heats up, then they get more ornery and become less fun to have around. The lizard would always perch on Abby's shoulder, but then when it warmed up, it would crawl up on top of her head, and we always had to take it out and bring in a cold lizard."

Getting the lizards to "react" was an exercise in patience. "If you keep the camera on the lizard long enough and you put enough bugs in front of him, he's going to turn his head," explains Levin. Co-director Jennifer Flackett supplied sounds that gave Fred a "voice." But making him dance? Forget it.

"We'd asked the trainers what tricks the sea lions could so, and we wrote those things into the movie, like the dancing scene," says Levin. "But getting the lizards to dance was something we did with computers."

Interacting with the bearded dragons freaked Breslin out at first, she admits, "but then I got over it." One of the dragons, Goblet, laid a dozen eggs while they were shooting. The first one hatched was named Nim -- and the second, Abigail.

Gerard Butler, in the dual roles of Jack and Alex, "had the range and the charisma to be able to do justice to both characters," co-director Mark Levin says. The two roles were originally going to be played by two different actors until Foster suggested that one actor handle both. And with the success of "300," Butler was in demand. "Everybody was quite excited to get him," says producer Paula Mazur.

Butler's new co-stars were among his biggest fans. Foster says they both enjoyed playing against type: "I'm making fun of my fearful characters and he's making fun of his big hero characters."

Abigail Breslin named Butler the biggest joker on the set, and he was also the company's resident potty mouth, the most frequent contributor to the set's swear jar. "We made $150 and donated it to the [Australian ASPCA]," Breslin says.