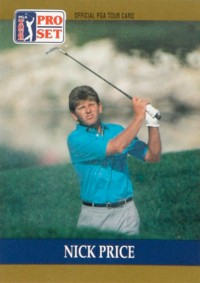 Nick Price had four PGA Tour wins in 1993 and topped the Tour money list in 1994. See more pictures of the best golfers.

It took Nick Price a while to find the winning touch on the PGA Tour, but once he did he dominated like no one had since Tom Watson in his heyday. From 1992-94, Price won 11 PGA Tour events and five international titles for a total of 16 victories. Three of the victories came in major championships.

Though Price turned out to be a late bloomer, for a while he looked like an early prodigy. The Zimbabwean won the Junior World in San Diego in 1974, claimed his first South African event at age 22 in 1979, and won in Europe the next year.

At the 1982 British Open, he led on the final nine before playing the last six holes in 4-over-par to finish second to Watson. The next year, his first on the PGA Tour, he won the World Series of Golf.

Then, for the next eight years, Price went winless on the PGA Tour. He had five runner-up finishes and ranked between 22nd and 43rd on the money list every year from 1986-90, but he couldn't quite put everything together in one week. He finished second in the British Open again in 1988, this time falling to Seve Ballesteros's closing round of 65.

Things finally changed in 1991 when Price won the GTE Byron Nelson Classic and Canadian Open. His confidence boosted, and putting better than he had in his life, Price was ready to go on a sustained roll.

He won twice in the U.S. in 1992, including his first major, the PGA Championship. Price had four PGA Tour wins in 1993 -- the Players Championship in March and three straight starts in the summer. He was even better in 1994, winning five times in just 19 events on the PGA Tour plus finally capturing the British Open.

With his six-stroke romp in the PGA Championship, Price became the first player to win two straight majors since Watson in 1982. Price passed the $1 million mark in earnings in 1992, 1993, and 1994, leading the money list the latter two years. He won the Vardon Trophy in 1993.

After finishing second at the British Open in 1982 and 1988, Price won the Claret Jug in 1994. He added five victories in the United States that year and topped the Tour money list.