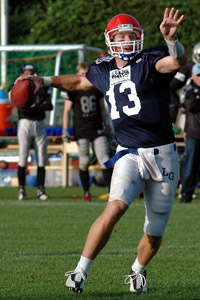 This quarterback, caught in mid-throw, is hoping for a completion.
Torsten Bolten

You can barely be heard over the cheering of the crowd. They are clapping and stomping their feet so loudly that the other ten guys around you huddle in closer to hear you call the play. Once the message is received, all eleven players burst from the group and sprint to the line. Time is of the essence as you line up five yards behind the center in the shotgun formation. On your command, the center shoots the ball back to you, and time slows down a bit as the chaos and fury of the play begins.

You scan the field, looking for your open receivers. Option one is covered by two defenders; option two has run the wrong route, again. And then you see him: your third option, running wide open down the left side of the field. You rear back and send the football spiraling down the field and into the waiting hands of your receiver. He dodges a tackle and sprints another 15 yards to the end zone. Touchdown!

Your pass has not only won the game for you and your team, but has also gone a ways toward boosting your overall quarterback rating, a system designed to track the play of this ever-so-vital position. The name may be a bit misleading, as the rating system only looks at the passing play of the quarterbacks, and not how they perform overall. What that means is that a quarterback who runs for three touchdowns in a game, but only completes five passes out of 30 tries, will have a lower rating than one who runs for zero touchdowns but completes 20 of 23 passes.

Since the rating system looks at passes, it only relies on four major stats: percentage of completions, average yards per attempt, touchdown passes and the dreaded percentage of interceptions [source: NFL.com].

Before we get into the meat of the rating system, let's see where it began. Huddle up and read on for a breakdown of the history of this system.

Before we get into the ratings system itself, let's look at how the system progressed from a pee-wee player into the professional it is today. The current rating system has been in place since 1973, but it has gone through a lot of changes. Some form of the system has been around since the early 1930s, when the only statistic kept was total passing yards. Through the years, stats were added to the list or taken away, with some years looking at a total of six different figures and other years having only one number to rely on.

The major problem with these older systems is that they all relied on numbers from other quarterbacks to make any sense. In other words, all the quarterbacks were judged against the group instead of each player being rated on an individual basis.

In 1971, Don Smith was working as an executive with the NFL Pro Hall of Fame. Quite the statistician, Smith began working on a system that would rate a quarterback based on his performance only. The new system, put into place in 1973, is based on four major factors (see sidebar) of a passer's game and will net a result that is roughly on a scale of zero to 150. Another advantage of the new system is that it can be used retroactively on all previous players. That allows the National Football League to compare quarterbacks from the early days of the game to those playing today [source: Don Steinberg].

Now that we know the history of the system, let's move on to discussing the Xs and Os of the formula. Click to the next page to find out how the rating is actually computed.

The Stats Used in the Ratings: An Explanation

The quarterback ratings system is based on four main stats from a quarterback's passing game. The rating is achieved by taking a percentage of the following stats: completions, average yards per attempt, touchdown passes and interceptions.

If you happened to hang on to your calculus book from college, now would be a good time to bring it back out, because it's time to test some of those old math skills.

When Don Smith was coming up with his formula, he decided that the best method was to award points based on how quarterbacks performed in relation to a solid standard. In other words, if a quarterback completed just half of the passes he threw, then he would get a point for hitting the average number. If he fell below 30 percent, then that quarterback would get no points, while passing above 70 percent would earn him two points. A similar system is then devised for the remaining three categories, with each quarterback given between zero and two points according to how well they do in each stat.

Now, because the high percentages are based on existing records, and we all know that records can be broken, the system allows for some wiggle room. That is why some quarterbacks will end up with a number greater than two for some of their stats.

The final step in the process is putting all the data together and coming up a number that makes sense. Once all the initial points are added up, they are divided by six. But the number you end up with after all that seems relatively tiny; for example, .983 doesn't look very impressive as an athlete's rating, so Smith decided to multiple it by 100. Therefore, a .983 rating is all of the sudden a 98.3, which looks much more substantial. Also, because of the wiggle room mentioned above, there is a chance that the greatest quarterbacks will end a season with a rating over 100. Check out the sidebar for a breakdown of Steve Young's amazing 1994 season in which he ended up with a rating of 112.8 [sources: NFL.com, Don Steinberg].

Now that we have our quarterback's rating, what comes next? Read on to find out the purpose behind the ratings.

A Closer Look at the Numbers

Here's an example of the math using Steve Young's record-setting season with the San Francisco 49ers in 1994, in which he achieved an overall rating of 112.8. During that season, he completed 324 of the 461 passes that he attempted, racked up 3,969 yards and 35 touchdowns, and threw only 10 interceptions. 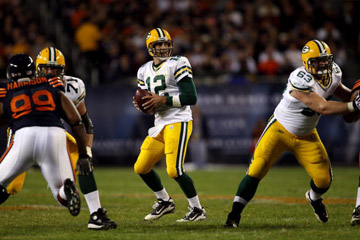 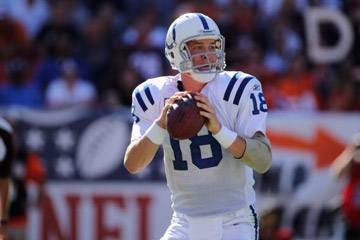