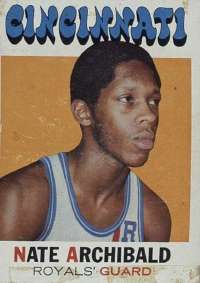 Every year, it seems, there are reports that scouts have found the next Nate Archibald. To be the next Archibald, one must be a slippery left-hander, no taller than 6'1", with a scorer's touch and a playmaker's imagination. Archibald is the only player ever to lead the NBA in both scoring and assists in the same season.

Born into poverty in New York City on September 2, 1948, Archibald found comfort on the asphalt of the South Bronx. Nicknamed "Tiny" for obvious reasons, he ran circles around bigger kids while developing a knack for delivering his shot in traffic. Academics weren't a priority, and he was suspended from the team at DeWitt Clinton High School because of poor grades. At the University of Texas-El Paso, he set a new scoring record with 1,459 points but was viewed with skepticism by NBA teams. In 1970, Cincinnati Royals coach Bob Cousy gambled a second-round pick that Tiny could make the jump.

Cousy wasted no time turning Archibald loose. In his second season, he finished second to Kareem Abdul-Jabbar in the NBA scoring race. In the 1972-73 season, after the Royals became the Kansas City-Omaha Kings, he was a veritable one-man team, pacing the NBA in scoring (34.0 points a game) and assists (11.4). Injuries slowed him the following season, and an Achilles tendon tear he suffered in 1977 kept him out for more than a year. No longer a top player, he became trade fodder. When he arrived in Boston in 1978, it was his fourth team in three years, yet he found new life with the Celtics, running their offense for five seasons and winning the NBA championship in 1981. He retired in 1984 with career averages of 18.8 points and 7.4 assists.

Though Archibald was elected to the Hall of Fame in 1990, basketball people disagree about his place on the list of great point guards. With the Royals and Kings, perennial cellar-dwellers, his gaudy statistics never translated into wins. When he won in Boston, his stats were modest. But if he weren't one of the best ever, scouts wouldn't bother looking for another just like him.