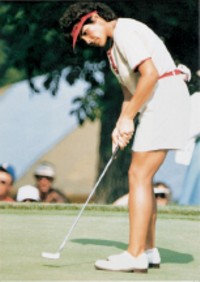 Nancy Lopez joined the LPGA Tour in 1977 and won 17 of the first 50 tournaments she played. See more pictures of golfers.

Nancy Lopez's phenomenal streak in 1978 drew plenty of attention. Golf, after all, is not a game conducive to streaks; just making two or three consecutive birdies is something special, and it is rare for a golfer to win just two tournaments in a row. So when someone has a streak like Lopez's, it's bound to make more than a dent in the golfing world.

The streak hoisted Lopez immediately into the spotlight of big-time golf, and it also was a much needed fillip for the women's tournament circuit, which was having trouble at the time getting attention in an increasingly diverse sports world.

Nancy's streak put her, and her organization, indelibly on the sports map. It didn't hurt that she also had one of the most beautiful smiles seen in a public figure, a smile that reflected the natural warmth of her character.

Nancy Lopez was born in 1957 in Torrance, California, but was raised in Roswell, New Mexico. Her father, Domingo, was the driving force behind Nancy's career. He was himself a golfer, and when he recognized Nancy was also interested and had talent, he did all he could to help her go forward in the game.

Mr. Lopez made a modest living running an auto repair shop, but he always found the dollars it took to get his only child the golf equipment she needed -- as well as to pay the greens fees at the local municipal course and military base course on which she learned to play.

There was no money for lessons, so Nancy was largely self-taught. The result of this was an unusual, idiosyncratic swing in which she arched her wrists to an almost vertical position to begin her backswing, which was very upright. From there on, however, she had a fine tempo and -- with superb control of the club -- had a "traditional" downswing and follow-through.

Nancy's distance was never outstanding, but she knew how to handle problem shots. Her father didn't give her much swing instruction, but when Nancy was eight he gave her a 4-wood as her first club and encouraged her to not tee the ball up but rather play the ball as it lay, as she found it. Lopez's soft putting touch, one of the best the game has ever seen, was probably innate.

It came together quickly. When Nancy was 12, she won the New Mexico Women's Amateur championship. That she defeated much older and more experienced golfers goes without saying. She was quickly deemed a golfing prodigy and was invited to play and practice as often as she liked at country clubs in Roswell. She took up the offers graciously.

In 1976, she played for the U.S. Curtis Cup team and was also on the U.S. World Amateur team. Lopez received a golf scholarship to Tulsa University, but after her sophomore year she turned professional, in 1977.

All the more remarkable for an athlete of her accomplishments, Lopez -- the wife of baseball star Ray Knight -- found the time and energy to become a mother of three children, and to raise them conscientiously.

Lopez's first daughter was born in 1983, her second daughter in 1986. Within those years and up to 1991, when she gave birth to her third daughter (and won a tournament while carrying her), Lopez won 19 tournaments, earned over $2 million in prize money, and had a stroke average of just over 71.

Lopez continued to play a full schedule of tournaments from 1992-95, teeing it up in 77 LPGA events, winning three of them, and collecting over $1 million in prize money. In the 1992 Rail Charity Classic, she tied her career-low score, a 64, in the final round to take the title.

Through 1996, Lopez had won 47 official LPGA tournaments (plus three unofficial ones), which ranked her sixth all-time. The only LPGA players to win more often played in the formative years of the Tour, when there were fewer competitors.

In 1987, Lopez was inducted as the 11th member of the LPGA Hall of Fame. But in a curious parallel with Sam Snead, an unquestionably great player who never won the U.S. Open, Lopez has never been able to capture the women's national championship, although she has been runner-up on three occasions.

Lopez can't explain that one smudge on her otherwise splendid record, just as Snead couldn't. Nor has Lopez tried very hard to fathom the reason.

"Maybe some day," she has said with that incandescent smile, which has defused all further questions on the matter. Some day she may win the Open, but if not she will not be any less a champion.