Mix-down and How Multitrack Recording Has Changed Music 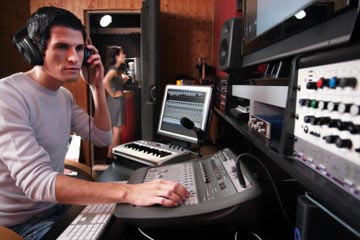 During the mix-down phase, after the recording is done and the band has left the studio, an engineer can use the mixer to tweak the different levels and tonal qualities of the particular tracks. For instance, equalization controls (or EQ) affect the bass, mid-range and treble. Other effects such as echo can be added in the mix-down phase, too. You can even change the spatial positioning of the tracks for stereo effects.

Mix-down is the part when having multiple tracks really pays off. Bartlett explains that before multitrack recording developed, engineers had to mix the music as it was being performed, which is extremely difficult. He says that the great old recordings that sound good despite these challenges are "testament to the skills and quick decisions of the recording engineers of that era."

Bartlett explains that because engineers have much more time to work with mixing and effects after the music is recorded, the effects have become an increasingly important a part of the music itself. Because of that, the line between artist and engineer has blurred. And it's notable that several decades after its inception, multitrack recording remains an invaluable way to explore musical innovations and creativity.

To explain further how the effects have become part of the music itself, Bartlett gives the example of how pitch-correcting computer effects now allow any singer to be in pitch. In addition, he mentions how the rap genre in particular is full of music that's extremely difficult to perform live because of the heavily edited sounds and loops.

Indeed, it's no surprise that recorded music that's been edited is now sounding so good that live performances seem to pale in comparison. Bartlett argues that this has encouraged artists to work to sound better on stage, hence increasing the quality of live performances. However, it's put so much pressure on artists that some opt to lip-sync their stage performances to a previously recorded version in order to live up to the recordings that fans are used to. Despite the ultra-polished sound of popular recorded music, some still value the feel of a live performance -- with all its imperfections.

Whether one prefers live music or the edited versions on studio albums is a personal preference. However, it's easy at least to appreciate the lush, layered sound and musical alchemy that only multitrack recording can accomplish.