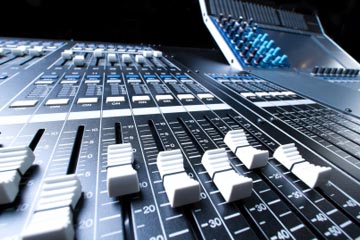 When we're given a delicious plate of food at a fancy restaurant, we can savor the wonderful medley of flavors without fully realizing the skill that went into choosing the different ingredients. The same could be said of hearing a great song on the radio. We probably hear the final polished product without realizing the enormous amount of work that went into it. Sure, most people know that writing and rehearsing a song takes work for musicians, but fewer realize the time and skill that goes into the engineering side of the recording process.

To explain, consider the evolution of music recording over the 20th century. Before the 1950s, recording a song always depended on musicians and singers performing over and over again together until they got the "perfect" take -- or at least the best. In this tedious process, if someone made a mistake, everyone had to start all over again.

This was the case until musician and innovator Les Paul started experimenting with recording over himself so that he could play multiple parts in the same song. In 1954, Paul convinced a company that made recorders, Ampex, to build him a 3-track recorder. This was the first multitrack recorder, which allows different "tracks" or channels of sound to record and playback synchronously (the vocals on one track, guitar on another, and so on). Each track can be rerecorded or deleted without affecting the other tracks.

Multitrack recording soon started to revolutionize the recording industry. The 4-track recorder became common by the 1960s. Innovators like the Beatles, the Beach Boys' Brian Wilson and producer Phil Spector took advantage of multiple tracks, experimenting with the new sounds they could create. The Beatles' John Lennon even decided to splice together two different versions of the song "Strawberry Fields Forever," meaning their producer George Martin constructed the final product from two four-track recordings. It didn't take long for eight-track recorders to become the industry standard.

Even since the 1990s, when the industry completely switched over to digital recording from analog tape recording, the multitrack process has only gotten more sophisticated. Now, the 24-track recorder is standard. But these can even be linked together to have 48 or 72 tracks if necessary.

We'll delve more into the process for a deeper appreciation of the engineering side of modern music recording.

We spoke with Bruce Bartlett, a recording engineer who writes often on the subject, and he explained the basic process of multitrack recording. Of course, the actual process will depend on the kinds of machines and equipment a particular studio has, but we'll go over a typical setup.

Bartlett says that, in the recording studio, you'll first decide which instrument or voice will be recorded onto which track. After placing the microphones near the corresponding instruments, you can then plug the different mics into a mixing console. A mixing console is a sophisticated mixer, which is a machine that combines the audio and allows an engineer to control the different volume levels of the different audio signals. An important role of the mixing console at this point is basically to amplify weak signals for the recording. But you don't have to get the levels perfect at this stage. You can tweak things to get the best sound and tonal qualities during the mix-down phase later.

The mixing console is connected to a multitrack recorder, where it sends the different microphone signals to the right track to be recorded. Some machines are recorder-mixers, which combine the two machines into one. Another option is to use a digital audio workstation (DAW), which uses a computer and software to record, edit and mix music. You can connect the instrument microphone inputs to an audio interface that connects to a computer, or use a separate mixer connected to the computer. One drawback to computers is that they're more likely to crash than recorders [source: Bartlett].

Of course, when the recording is done, it probably won't be perfect. As we mentioned earlier, one of the benefits of recording on different tracks is that one musician can make a mistake without necessarily affecting the tracks of the other musicians. If the drummer messed up a few times during the song, the engineer can rerecord the drummer's track while letting the other musicians take a break. In this situation, the drummer will be able to actually listen to the other tracks on headphones while banging away on drums, rerecording only that part of the song. The multitrack method allows this to be recorded in perfect sync with the other tracks.

But there's yet another solution. If the drummer only messed up once, that doesn't mean the entire drum track needs to be deleted.

We'd like to extend our appreciation to Bruce Bartlett for granting us an interview for this article. Mr. Bartlett is a recording engineer, and author of hundreds of articles and eight books on the subject. His books include "Practical Recording Techniques" and "Recording Music on Location," both published by Focal Press.

The Magic of Multitrack Recording 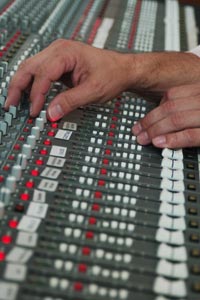 But it can get complicated. For instance, if you record a band playing close together, the singer's microphone could have picked up the drummer's mistake. When a mic picks up another sound, the sound is said to "bleed" or "leak" into the mic. Bartlett explains that this makes the recording harder to mix later and creates a "distant, muddy sound."

One solution to this type of problem is to simply record all of the parts separately. In the same way that Les Paul liked to play multiple parts himself, recording engineers can construct a song one instrument at a time. If an engineer decides to record instruments separately, experts recommend starting with the drums for a good rhythm track. You should then move on the bass guitar followed by lead guitar and keyboards [source: Schonbrun]. Each musician after the drummer can listen to the previous recordings on headphones. Recording the different instruments and vocals in isolation this way makes them much easier to combine later on. Another bonus is cost-cutting: Bartlett mentions that you can use one microphone instead of several, saving money.

In addition to the instrument isolation, isolated recording allows for enormous flexibility. For instance, Bartlett says that one musician can record in Los Angeles; he or she can then send the recording to another musician in Chicago, who adds another track. The process of adding a new track onto previously recorded tracks is called overdubbing. Often, even if the original song were recorded with the entire band, the engineer can decide to overdub another instrument to the song for a powerful effect, like swelling strings or brassy horns.

If you're recording a song with an instrumental or vocal solo, Bartlett recommends recording several takes of it -- each on its own track. That way, he says, the engineer can actually "pick and choose the best parts of each take." The composite, or comp, that results can therefore be the ideal take that never actually happened and is better than any of the takes that did.

'Bouncing' and the Advantages of Digital Multitrack Recording 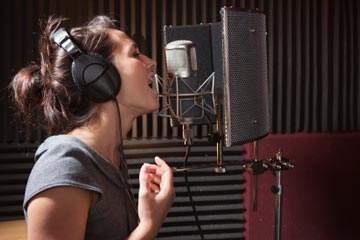 It's important for engineers to plan which tracks they'll want to use for what. If, for instance, you're working with a recorder with a limited number of tracks, you might need to plan to combine tracks later. This is possible through a process called bouncing, when an engineer rerecords multiple used tracks onto an open, unused track. For instance, if drums and bass guitar have been recorded on tracks 1 and 2, an engineer can rerecord ("bounce") both of these to track 4 and thereby free up tracks 1 and 2 for other instruments.

However, bouncing tracks makes it more difficult to mix later on, because the engineer can no longer adjust the different instruments individually once they're on the same track. Another drawback to bouncing is that, each time you do it, it degrades the quality of the sound. This is especially true for analog recordings, but the process degrades digital recordings slightly, too [source: Coryat].

Although multitrack recording can be performed in either analog or digital format, as we mentioned, the music industry has switched over to digital -- and for good reason. Bartlett explains that digital has several advantages over analog. For starters, digital yields higher sound quality and steady pitch, and you'll get none of the hiss sound or distortion that can plague analog recordings. (Of course, some musicians might prefer the hiss and distortion from analog, but that's a matter of taste.) Digitally, you can choose to record everything on a computer, allowing you to view and edit waveforms of the recorded music with ease.

In terms of multitrack recording, digital can offer you more tracks -- perhaps only limited by the amount of computer space you have. With digital, it's also easier to fix mistakes, as well as use random access to skip to a particular part of a song to edit. Sending the digital files long distances is a breeze, too. Instead of mailing physical analog tape reels, digital files can be sent over the Internet.

And because you won't have to buy expensive tape or maintain tape recorders, digital studios can be significantly less costly. Amazingly, Bartlett says you can put together a respectable digital home studio for less than $2,000, which would be just as good or better than a $100,000 studio back when analog was standard.

Mix-down and How Multitrack Recording Has Changed Music

During the mix-down phase, after the recording is done and the band has left the studio, an engineer can use the mixer to tweak the different levels and tonal qualities of the particular tracks. For instance, equalization controls (or EQ) affect the bass, mid-range and treble. Other effects such as echo can be added in the mix-down phase, too. You can even change the spatial positioning of the tracks for stereo effects.

Mix-down is the part when having multiple tracks really pays off. Bartlett explains that before multitrack recording developed, engineers had to mix the music as it was being performed, which is extremely difficult. He says that the great old recordings that sound good despite these challenges are "testament to the skills and quick decisions of the recording engineers of that era."

Bartlett explains that because engineers have much more time to work with mixing and effects after the music is recorded, the effects have become an increasingly important a part of the music itself. Because of that, the line between artist and engineer has blurred. And it's notable that several decades after its inception, multitrack recording remains an invaluable way to explore musical innovations and creativity.

To explain further how the effects have become part of the music itself, Bartlett gives the example of how pitch-correcting computer effects now allow any singer to be in pitch. In addition, he mentions how the rap genre in particular is full of music that's extremely difficult to perform live because of the heavily edited sounds and loops.

Indeed, it's no surprise that recorded music that's been edited is now sounding so good that live performances seem to pale in comparison. Bartlett argues that this has encouraged artists to work to sound better on stage, hence increasing the quality of live performances. However, it's put so much pressure on artists that some opt to lip-sync their stage performances to a previously recorded version in order to live up to the recordings that fans are used to. Despite the ultra-polished sound of popular recorded music, some still value the feel of a live performance -- with all its imperfections.

Whether one prefers live music or the edited versions on studio albums is a personal preference. However, it's easy at least to appreciate the lush, layered sound and musical alchemy that only multitrack recording can accomplish.