The MPAA and Movie Piracy 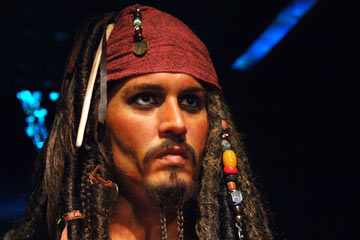 We're not talking about this kind of movie piracy! But Johnny Depp's movie did receive a PG-13 rating for "Intense Sequences of Adventure Violence."
Brad Barket/Getty Images

The Motion Picture Association of America (MPAA) is a trade organization created to advocate and fight for the interest of its members, the six major Hollywood movie studios:

The MPAA and its members consider movie piracy, particularly the sharing of illegal files on peer-to-peer (P2P) networks, to be the biggest threat to the film industry. To fight piracy, the MPAA actively lobbies the U.S. and foreign governments to write and enforce stricter laws against intellectual property theft.

At first glance, the movie industry is hardly suffering economically. Annual revenue from theatrical ticket sales now tops $10 billion, but fewer people are going to the movies than a decade ago [source: Nash Information Services]. Studios increasingly rely on digital distribution -- online downloads, streaming and digital rentals -- to make up for flat ticket sales. If digital piracy is allowed to flourish, the MPAA believes that 2.4 million American jobs could be at risk [source: MPAA].

The MPAA has been a vocal advocate for prosecuting both the owners and users of illegal file-sharing Web sites. In 2012, the MPAA filed an amicus brief (or "friend of the court" statement) supporting the Justice Department's piracy suit of Kim Dotcom, the owner and operator of MegaUpload, a "cloud storage" site that's allegedly a repository for pirated movies [source: McCullagh].