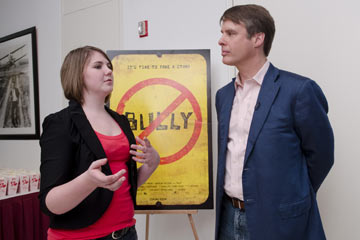 Katy Butler, the 17-year-old high school student whose campaign to get the MPAA to change the ratings of the movie "Bully" from an R to PG-13, poses with newscaster Terry Moran at a screening and discussion of the movie hosted by the MPAA.
Kris Connor/Getty Images

When the Ratings Board of the MPAA Classification and Ratings Administration (CARA) votes on a film's rating, it must choose from the following five options:

A filmmaker can choose to accept the rating assigned by the MPAA, reject it, or edit his or her film to qualify for a different rating. In 2012, the anti-bullying documentary "Bully" initially received an R rating for profanity, prompting a huge outcry since the film was intended for a teen audience. "Bully's" producers briefly considered releasing it as unrated. Eventually, there was a compromise: The filmmakers cut out a few "f-bombs," and the MPAA awarded it a PG-13 rating [source: Sacks].

The MPAA also must approve all advertising for the films that carry its ratings [source: MPAA]. Still, the Federal Trade Commission has criticized both filmmakers and the MPAA for creating ad campaigns that market PG-13 and R-rated movies to young children [source: FTC].