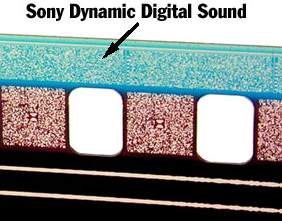 The latest entry in cinema digital sound comes from an entertainment industry giant. Sony Dynamic Digital Sound (SDDS) uses the outside edge of the film to stripe digital audio information. Unlike any of the other formats, analog or digital, SDDS provides error correction through the use of an identical redundant stripe on the other edge of the film. SDDS supports increased surround-sound options by offering eight channels of sound:

The SDDS reader uses a laser to direct focused beams of light. The light passes through the film, through a lens that magnifies the light and finally is received by an array of photocells. Wherever there are dark areas on the film, the photocells in that part of the array do not receive any light. Any photocell that does receive light emits a small amount of current. SDDS reads each cell as a 1 or 0 based on whether or not it is generating current. As the film streams by, this creates a constant stream of binary information that the reader sends to the digital processor.

Because it requires additional digital sound equipment, SDDS is more expensive to implement than DTS or Dolby Digital. Both formats convert their digital signals to analog after decoding, but SDDS uses a digital connection to send the decoded signal to a proprietary sound processor. Even so, the addition of two more channels of sound make it a very attractive format.

As you may have noticed in the images of film in this article, more than one sound format is usually recorded on the film. Since each format uses a different portion of the film, it is very economical for the distributor to include at least two of the digital formats on the same film. Virtually all commercial films today have Dolby Stereo as the analog format, and some films actually have all three digital formats as well!

You may be wondering why THX is not listed. Although commonly confused with a movie-theater sound system, THX is not a sound format -- it's something else entirely. See How THX Works to learn about it.

For more information on movie sound and related topics, check out the links below.