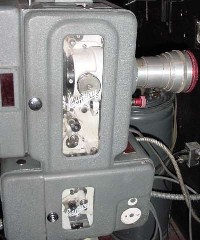 Tens of thousands of movie theaters across the U.S. use projectors like this one.

Projectionists have developed many innovative techniques to ensure that the show proceeds as it should. Cue tape is one of the more interesting and useful of these. It is a short strip of metal fastened to the edge of the film at a specific location. At the appropriate time, the film passes two electrical contacts, and the cue tape completes a circuit between the contacts. This circuit acts like a switch, and it can serve a variety of functions. A cue-tape switch can:

The last item on the list is not very relevant since most theaters now use platters, but changing projectors is the original reason that cue tape was invented. With cue-tape switches, manufacturers were able to automate the process of beginning one reel as the other ended. Enterprising projectionists soon realized that they could automate a number of other functions as well by using certain combinations of cue tape to trigger specific responses.

Cue tape has made it possible to automate many aspects of movie projection, such as changing sound formats between the previews and the movie, but new systems like Reel Automation's Showtimer promise to greatly enhance and expand automated processes.