Responsibilities of a Movie Make-up Artist 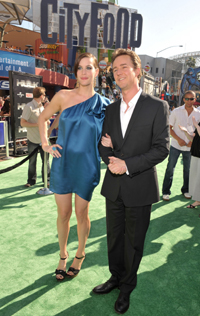 Movie make-up artists can only work on certain areas. They were responsible for turning Edward Norton into the incredible hulk. Norton, left, is shown at the premiere with co-star Liv Tyler.
© Lester Cohn/WireImage/Getty Images

After that, the key make-up artist researches and determines how to design the make-up and special make-up effects for the film. Often complex effects are handled by a different departments and farmed out to companies that specialize in special effects.

The key make-up artist also hires additional make-up artists for the film, sets their work schedule and supervises them during production. He is charged with making sure the make-up applied matches the agreed-upon style, and that continuity is maintained every day during shooting.

In addition, the key make-up artist develops and stays within a budget for salaries, supplies, materials and special effects. He also makes appointments with optometrists and dentists for actors who need special contacts or dental effects. Once prosthetics, hairpieces and other make-up elements are finalized, they all must be inventoried and stored when they are not in use.

The senior make-up artist oversees the work of the other make-up artists and usually become primarily responsible for continuity. This means making sure that actors' make-up remains the same or changes as filming requires, such as the addition of scars after an accident or evidence of aging as the film progresses.

Make-up artists do the actual work in making actors' looks match the designs set for the movie. They apply and touch up the make-up.

Where do hair designers fit in? They usually are considered a separate department, also with a key designer and senior artist. Stars often bring their own hairdresser to filming locations, rather than using the services of the film's hair department. Of course, the hair, make-up and costume departments work closely together to give the look the director, screenwriter and movie producers want [source: Frederick Levy].

You may be wondering what a movie make-up artist actually does in the course of a workday. Go to the next page to find out.