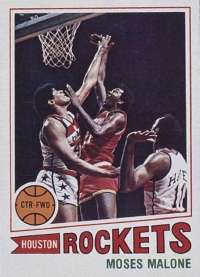 Moses Malone and the 76ers swept the Lakers in the 1983 NBA Finals, with Malone earning series MVP honors. See more pictures of basketball.

Moses Malone played 21 seasons, won three NBA Most Valuable Player Awards, and set a slew of records, including most career offensive rebounds. He retired following the 1994-1995 season with totals of 27,409 NBA points (fifth all time) and 16,212 rebounds (fifth).

A resolute rebounder and tireless worker, professional basketball has never seen another competitor quite like Moses Malone.

Malone blazed an unusual path to stardom as the first player to go directly from high school to the pro ranks. Though ill-educated, Malone understood at an early age that pro sports were big business. He was drafted once, sold once, chosen in a

dispersal draft once, traded four times, and was a free agent five times.

At one point, he was the sole player from the defunct American Basketball Association to still be playing in the NBA. And he played for three pro franchises -- the Utah Stars, the Spirits of St. Louis, and the Buffalo Braves -- that no longer exist. When Malone started out as a rookie, he was skinny and lacked a polished offensive game.

He thrived because of his strength, his fierce pride, and his willingness to work. Late in his career, he gained a reputation as a ball hog who was only concerned with his own stats. He didn't care who he worked for either, as long as he got paid.

Born March 23, 1955, Malone grew up dirt-poor in Petersburg, Virginia. His father left home before Moses's second birthday. He was raised by his mother, Mary, who worked in a meat-packing plant.

A basketball prodigy at Petersburg High School, Malone averaged 36 points, 26 rebounds, and 12 blocked shots during his senior season and became the most heavily recruited prep player in history. More than 200 colleges -- and the Utah Stars -- pursued him.

The Malones bought a guard dog to keep the hordes at bay. As legend has it, Stars general manager Bucky Buckwalter was bitten by the dog after sneaking through a field to get a look at Moses. One college coach lived in a Petersburg motel for more than two months trying to woo Malone. Finally, Moses said he would attend Clemson. Then he changed his mind to Maryland.

On August 29, 1974, the day he was to start classes, Malone signed a four-year contract with the Stars. Reaction from inside the college ranks was filled with righteous indignation. The rival NBA didn't like it either. But there was no question Moses belonged. In his rookie season, the 19-year-old wunderkind averaged 18.8 points and 14.6 rebounds and shot 57.2 percent from the floor.

The Stars folded in December 1975, and Malone was sold to St. Louis, a team with a wealth of talent and some of the strangest characters in basketball history. Malone's play suffered badly. When the ABA merged with the NBA, he was shuffled from Portland to Buffalo to Houston in a span of 11 weeks.

Yet by the end of his first season with the Rockets, it was obvious that Malone was going to be a dominant player in the NBA. During the 1978-79 season, he led the league in rebounds with 17.6 per game and ranked fifth in scoring at 24.8 points per game. He captured the MVP Award in a landslide.

In 1982, Malone won his second MVP Award after averaging 31.1 points per game and winning his second of five straight rebounding championships. He scored his career high of 53 points in a game against San Diego. Houston traded Moses to Philadelphia during the summer of 1982.

In addition to leading the league in rebounding for the third consecutive season, Malone led the Sixers to the 1983 NBA championship and garnered another MVP Award.

A controversial trade sent Malone to the Washington Bullets in 1986. He signed free-agent contracts with the Atlanta Hawks in 1988, the Milwaukee Bucks in 1991, the Sixers again in 1993, and the San Antonio Spurs in 1994.

When he retired, Malone made more free throws than any other player in pro basketball history (8,531) -- a record since broken by another Malone (Karl) -- and he went a record 1,212 games without a disqualification.

A six-time rebounding champion, Malone was the original Chairman of the Boards. He once had 37 rebounds in a game. During some seasons, he grabbed more than a third of his team's rebounds. In 1978-1979, he snatched 418 more rebounds than anyone else, a feat surpassed only by Bill Russell.

Playing for Houston on February 11, 1982, Moses had 38 points and 32 rebounds against the Seattle SuperSonics. His total included 21 offensive rebounds, the most in one game in NBA history. Amazingly, no Seattle player had more than five rebounds in the game! The Rockets won 117-100.