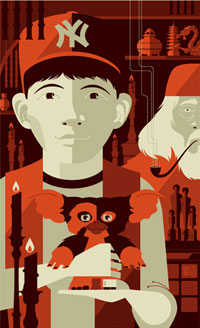 While the creatures didn't become a mainstream phenomenon until the 1980s, mogwai accounts date back to ancient China. In modern times, gremlin infestations plagued military operations throughout World War II. In fact, most experts agree that this global military conflict allowed stowaway gremlins and contraband mogwai to spread across the world.

But why are these organisms so peculiar? Where do they come from? The theories range from ridiculous yarns about alien wizards to divine lessons in virtue and temptation. We'll briefly explore the three leading theories:

Naturalist theory: Most scientists hold that for all their strangeness, mogwai and gremlins are a naturally occurring species. As we've explored in this article, they might be the oddest land vertebrates on Earth, but their biological processes are less strange when you take in the planet's diversity. Over the course of their evolution, they've lost their ability to reproduce sexually -- and might well have lost their larval mogwai stage entirely if not for human intervention. The resulting lack of genetic diversity allowed a congenital photosensitivity mutation to dominate the species.

Human intervention is key to understanding the naturalist theory of gremlins. While the creatures may seem unbalanced and ecologically dangerous, we have to remember that human beings allowed them to spread around the globe -- much as we've spread such devastating invasive species as the lionfish, kudzu and domestic cats. Also, both gremlin budding and metamorphosis depend on ready access to food and water -- commodities less prevalent in, say, China's Gobi Desert than the modern human home.

So who's the real monster? The ecosystem-wrecking humans or the mogwai with a love for late-night snacks and occasional Broadway performances of "New York, New York"?

I think we both know the answer.

Some scientists argue that the infantlike larval mogwai form enables the creatures to appeal to humans for food and care. In other words, their "cute factor" might be an evolutionary adaptation. Once they've infiltrated a human family, they then have access to the food surplus necessary for metamorphosis.