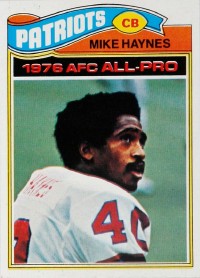 For Mike Haynes of the Los Angeles Raiders, the December 2, 1984, game against the Miami Dolphins was critical. A loss would have severely damaged the Raiders' playoff hopes.

Analysts made frequent mention of the "pressure" the Raiders team faced. But if Pro Bowl cornerback Mike Haynes was feeling the pressure, it didn't show.

On the Dolphins' first possession, Haynes intercepted a Dan Marino pass and returned it 97 yards for a 7-0 lead. Later, Haynes grabbed another and returned it 54 yards to set up another touchdown. The Raiders coasted to a 45-34 victory. For Mike Haynes, it was just another day at the office.­

Haynes (born 1953) was a two-time All-American at Arizona State before being drafted by the New England Patriots in the first round of the 1976 NFL draft.

He was a Pro Bowl player six of his first seven seasons with the Patriots. During that time, he intercepted 28 passes and was widely recognized as the best cornerback in the league.

Rarely beaten on a deep route, Haynes combined great speed with agility. Opposing quarterbacks realized that the best way to handle Mike was to avoid throwing in his direction.

The Patriots also utilized him as a punt returner. In his rookie season, he returned two punts for touchdowns with runs of 89 and 62 yards.

A contract squabble with New England caused Haynes to sit out the first 11 games of the 1983 season before being traded to the Raiders for a first-round and a second-round draft pick.

His impact with the Raiders was immediate. A master of man-to-man coverages, he became the final piece of the Raiders' championship-season puzzle.

In Super Bowl XVIII, he frustrated Washington Redskins quarterback Joe Theismann with his tight coverages and demonstrated his big-play ability by intercepting one pass and defensing another.

In seven seasons as a Raider, Haynes earned three more Pro Bowl bids and added 18 more interceptions for a career mark of 46. He made the NFL's 75th Anniversary All-Time Team in 1994 and was elected to the Hall of Fame in 1997.